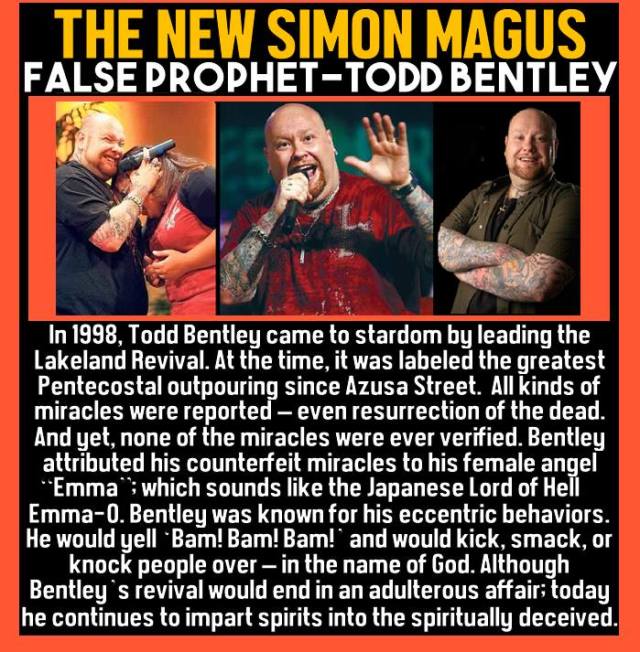 The Kansas City Prophets was founded by Bob Jones; who was a proponent of the heretical theology of the Manifests Sons of God and Later Rain movement. In 1991, Bob Jones was fired from Vineyard church, after confessing to sexual misconduct. He had teenage girls strip naked in his office for counselling. After girls undressed, he would share a word from the Lord. Hence, the entire foundation of the Kanas City Prophets was rotten.

Another aspect of Bentley’s ministry is his obsession with angels. He is a fanatic of strange angelic encounters. He told his congregation – that God wanted him to focus his preaching on angelic visitations. One of Bentley’s missions was to open up stargates in cities around the world. Thus, Bentley wants to flood cities with angelic spirits.

Todd Bentley even used angels to gather money for him. He stated, “Father, give me the angels in heaven right now that are assigned to get me money and wealth. And let those angels be released on my behalf. Let them go into the four corners of the earth and gather me money”…

Ultimately, the Lakeland Revival would end abruptly, after Todd Bentley was caught in an affair. This led to the breakup of Bentley’s marriage; which sent shockwaves throughout the Charismatic world. For many it was a wakeup call that Satan was the author of the entire event. Still, today, many believe despite Bentley’s moral lapses, he is a great man of God. With the help of Knight of Malta, Rick Joyner, Bentley has been brought back to the limelight; and continues to lead people astray.

One thought on “Todd Bentley Exposed”