It has been my observation that demons seem to make a very specific effort to gain contact in every child’s life at an early age. It’s perhaps because our childhood is very formative years. That may be the reason why the Bible teaches to “train up a child in the way he should go: and when he is old, he will not depart from it” (Proverbs 22:6).

In the Bible, there is a case of a demonized child (Luke 9:38-39) where the child would suddenly cry out, have convulsions, and foam at the mouth. Stuff like this has been recorded throughout history. This goes to show the viciousness and evilness of the enemy.

A child can be demonized and the vast majority of the world won’t even discern it (a lot of times demons like to operate undetected). Take, for example, a girl named Jani Schofield, who was on Oprah and other news programs, which covers her schizophrenia condition and how her parents manage their life coping with her. She has many telltale signs of demonization. A few examples are that Jani would have moments of intense violent outbursts, but she wouldn’t remember it. She has many imaginary friends that she admits are bad friends because they tell her to do bad things. I believe her “friends” are really demons just masquerading as friends.

The “boogie monster” a child claims to have seen at night maybe not be something that of the child’s imagination but actually real. If your child is afraid to go to sleep because of something “in the closet” or “under the bed,” they may actually be experiencing contact from the demonic world. Perhaps the child is being demonically attacked if he or she is suffering from recurring nightmares. Parents should teach their children spiritual warfare prayers in the name of Jesus. Children have such a simple faith that the Lord can work in mighty ways in their lives. And parents should pray with their children every night before bedtime.

The following are some examples found in the book “Prepare for War” where the author relates her experiences with people who were targeted by the enemy at a young age:

“Jim clearly recalls an incident when he was four or five years old. His bedroom had a six-inch book shelf along two walls. He awakened one night feeling something strange in his room. Sitting up in bed he looked up at the shelves and saw a row of ‘creatures’ all along the shelves. They were fierce looking and were shooting arrows at him. He was terrified and ran into his parents’ room. That was the only time in his life he can remember getting into bed with his parents. His parents were not Christians and merely passed the incident of as a childish nightmare” (p. 128). 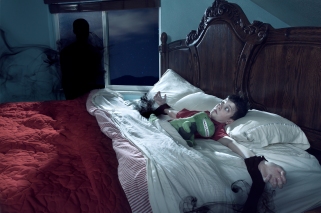 “Judy had Christians parents who were not alert. At the age of three or four she started awakening at night to see a black figure standing next to her bed. She was terrified at first, but her parents consistently told her she was just having a dream. Finally, she started talking to the figure and quickly lost her fear of it. Judy had a grandmother who was a witch and she herself became involved in witchcraft in her early teens, easily establishing contact with demons. She finally accepted Jesus in her thirties. What would have been the course of her life if her parents had been alert enough to stop the demonic contact in her early childhood?” (p. 129)

“Susan begin experiencing a “black blob” which came into her room at night and clawed the sheets off of her bed. Many times the sheets were actually ripped. Susan had inherited many demons, so did not feel afraid of the “blob.” Instead she got mad at it because her mother would always spank her the next day for ruining the bed sheets. She said she quickly started to talk to it, asking it why it always got her into trouble with her mom. Its answer was that she shouldn’t worry, it could help her ‘get even’ with her mom for punishing her unfairly. Susan entered into Satanism at an early age, easily and quickly establishing communication with the various demons” (p. 129).

“Steve is another child who had demonic experiences at a young age. He would awaken feeling “evil” under his bed. When he would try to move or call out for help he found himself paralyzed. He was continuously rebellious from early childhood, and experienced the same paralyzing evil later in life when taking street drugs. His was a long road to have happened if his parents had been Christians and had protected their child with power of Jesus Christ? Perhaps Steve would not have been so rebellious and would have come to Jesus at an early age, thus saving him from many hurts and sorrows” (p. 129-130).

Another example of childhood contact by demons is found in a decades-old book called “The Beautiful Side of Evil,” by Johanna Michelson. Johanna saw spirits in her home at an early age. She was oppressed by these evil spirits for years.

In my life when I was a child, even before I became a Christian, I had what I now interpret to be demonic attacks. I would have what they call night terrors where I would wake up abruptly from a dead sleep with a feeling of terror. I have also had a very strange sleep paralysis experience when I was a child.

When I prayed for deliverance for her the demons were manifesting through her dramatically. I asked the demon how did it get in and sure enough, it said it entered her at a young age because it didn’t want her to serve God.

Parents: please constantly cover your children with prayer in the name and authority of Jesus.

One way a child can be demonized is through generational curses. Click here for information.