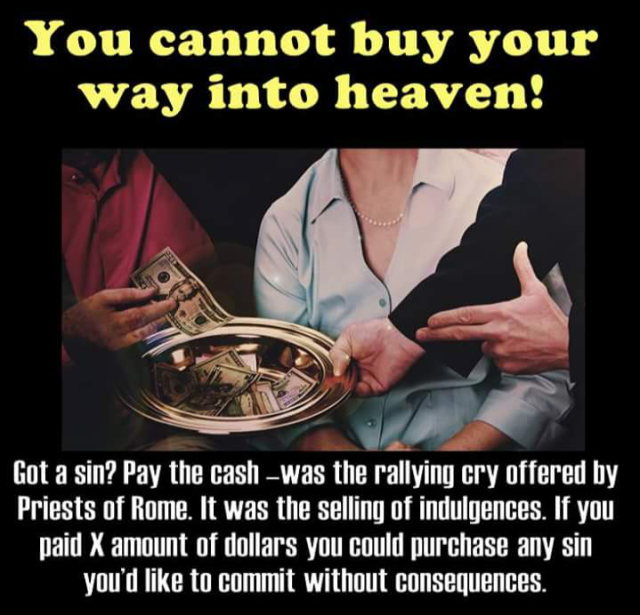 Is the concept of Catholic indulgences biblical?

An examination of the passages the Roman Catholic Church uses to support such doctrines as temporal punishment, vicarious atonement by fellow believers and saints, and Purgatory illustrates the Catholic reliance on tradition above and beyond Scripture. Other doctrines, such as the Treasury of Merit, the “pristine and unfathomable merit of Mary,” the “superabundant merit of the saints,” and the existence of indulgences, are foreign to Scripture altogether! Is the doctrine of indulgences scriptural? A consistent and contextual interpretation of Scripture will neither support the teaching of indulgences nor the doctrines it is built upon.

The Roman Catholic Church cites a few passages for their scriptural support of Purgatory. In addition to a passage from the apocryphal 2 Maccabees, 1 Corinthians 3:10-15; Matthew 5:26; and Matthew 12:32 are also given as scriptural support. Matthew 5:26 is part of a parable on the issue of forgiveness. Matthew 12:32 is addressing the issue of blasphemy of the Holy Spirit. Neither passage focuses upon what happens after death nor gives a clear teaching of what takes place after death. It is a principle of hermeneutics (the study of how to rightly interpret Scripture) that one should interpret “unclear” passages that merely touch on an issue by passages that focus on that issue or are clear about that issue. To interpret these verses as teaching that there is a place of further atoning and purifying in Purgatory after death flies in the face of many clear statements in the Bible that there are only two places that one will end up in after death: either in heaven with the Lord (2 Corinthians 5:8; Philippians 1:21-23; 1 Thessalonians 4:13-18) or in hell in torment (Luke 16:23-24; Revelation. 20:10-15). The Bible does not say that after death comes “further purification”; it says, “It is appointed unto men once to die, but after this the judgment” (Hebrews 9:28). See the GotQuestions.org article on What does the Bible say about Purgatory? for a further discussion on this issue.

Catholics speak of “doing penance” for their sins. At the end of confession to a priest, the confessor is given certain things to do (such as certain prayers to pray) that are a part of “doing penance.” Part of the purpose of this penance is to bring about a returning of one’s disposition away from sin and back toward God. But another purpose mentioned repeatedly in Roman Catholic literature is that of paying or atoning for one’s sins. This is not the same as making restitution to those hurt by one’s sin, but rather involves making a payment toward the temporal punishment to satisfy God’s justice. This latter purpose is closely tied to the idea of indulgences and is not mentioned in Scripture. The Bible does speak of repentance, referring to a “change of mind about one’s sin that results in a change in behavior.” John the Baptist’s ministry and teaching is summarized in Luke 3:3-18. He told those that were baptized by him (their baptism being a sign of their repentance) to show by their deeds that their repentance was real. But never is there the message of “you must pay or atone for your sins by doing some good deed or by abstinence,” or by anything else. By this call to good works, John was essentially saying, “Show me your repentance is genuine by your works” (cf. James 2:18). But again, the idea of “doing penance” as an atoning for our sins or a repaying of a temporal debt to God’s justice is never mentioned in Scripture!

Catholic Indulgences and the Treasury of Merit

The doctrine of the “Treasury of the Church” was first officially expressed in 1343 by Pope Clement VI. He describes this treasury as not only consisting of the merits of Christ’s atonement but also “the merits (atonements) of Mary, the Mother of God, and of all the chosen, from the greatest to the least of the just, contribute to the increase of the treasure from which the Church draws in order to secure remission of temporal punishment.”

The Bible never once refers to anything like the “Treasury of Merit,” and never is there the thought that atonement can be made by one believer for the sake of another’s sin. Paul expresses that, if it were possible, he would sincerely be willing to be accursed, if that would mean the redemption of his fellow Israelites in Romans 9 and 10. But that is not possible because Paul and the other writers of Scripture state that, for a believer, the just Judge was satisfied when Jesus Christ became the atonement (propitiation) for our sins and that apart from Him there is no atonement (Isaiah 53:6; Romans 5:10-11; 2 Corinthians 5:21; 1 John 2:2; Hebrews 10:1-18). Never is there any hint of the idea of vicarious atonement by believers, either alive or dead, for the sake of their fellow believers. The Roman Catholic Church may make a distinction between atoning for people’s eternal punishment and their temporal punishment, but the idea of anyone other than Christ atoning for anyone’s sin and its corresponding punishment is never found in Scripture. Never is there any teaching about the “superabundant satisfactions of the Saints” or that the prayers and good works of Mary “are truly immense, unfathomable, and even pristine in their value before God.” In Scripture, there is only the unfathomable and infinite value of Christ’s atonement…period.

It is clear that the Roman Catholic Church teaches that there is a forensic or “legal” nature to temporal punishment; i.e., that it involves the need to satisfy the justice of a just Judge and that if that justice is not satisfied by atonement in this life, it must be atoned for in the next in Purgatory. It is that forensic or “payment to satisfy justice” aspect that is unscriptural. Scripture does teach that indeed one’s sins can be forgiven in the eternal sense (with the sinner no longer being condemned to hell) or even in an earthly sense (in not having the penalty laid down by the Mosaic Law inflicted upon the sinner, 2 Samuel 12:13). Sin changes things in this life and how God interacts with us in this life. It has to for a number of reasons given in Scripture:

1) This is a real world where real actions have real consequences. If we plant barley in the spring, we don’t harvest wheat in the fall. If we plant sin, we eventually reap turmoil, hardship, destruction, and death (Galatians 6:7; Romans 3:16; James 1:15).

2) Our sin and God’s response to it affect how we and other people view our God. If we sinned and there were no obvious effects to it, we would see sin as something that is “no big deal” to God, and thus His holy character would be blasphemed. This is one of the reasons God cited for the death of the child conceived by David in adultery with Bathsheba (2 Samuel 12:13-14)—if there were no earthly consequences to David’s murder of Uriah and his adultery, then God would be viewed as One who condoned such sinful actions.

3) Others “looking on” would be encouraged to sin. First Corinthians 10:1-12 states that all of the punishments imposed by God upon the Israelites for their disbelief, idolatry, lust, etc., were recorded for our admonition so that we could learn from their mistakes. Proverbs says that others are encouraged to sin when punishment upon sin is delayed (i.e., if we see someone else “get away with it,” we are also encouraged to repeat their sin). So, an earthly punishment is either imposed by God or the natural consequences of sin are allowed to come to maturity so that others may learn not to sin.

4) God disciplines us for our benefit so that we may enjoy the fruit of righteousness that He intended for us. When a person places his faith in Christ, God ceases to be his Judge and becomes his Father (John 1:12). We will stand before Him as a Judge of our works done after salvation (2 Corinthians 5:10-11; 1 Corinthians 3:10-15), but now we have peace with God (Romans 5:1-10) and there is no more condemnation (Romans 8:1). But as a loving father disciplines his children for their good, so God disciplines us for ours (Hebrews 12:3-11). But when you look at the description of this heavenly discipline given in Hebrews 12, you find no thought of punishment as in the sense of one being required to pay or atone for a crime!

So, one does find that God either imposes earthly consequences or allows the natural consequences as a result of sin, but in no passage does it say that these consequences are imposed so that His temporal justice may be satisfied!

In conclusion, having discussed the lack of scriptural support for some of the foundational doctrines necessary for the existence of indulgences, it must also be stated that there is not a single scriptural example of, or teaching about, an apostle or church leader doling out an “indulgence” to a fellow believer. Not one! From its foundation to its summit, the whole structure of the doctrine of indulgences is unfounded biblically.

It is our prayer that as the apostle Paul saw many converted to Christ because they compared his teachings to Scripture (Acts 17:10-12), so those who read this summary would read the inerrant and infallible Word of God for themselves and simply ask, “Are the teachings of the Roman Catholic Church found in what I have read? Do they ‘fit’ both the immediate context of any given passage and the context of the New Testament as a whole? Is the ‘system’ of the Roman Catholic Church found in the New Testament?” It is our prayer that all those who claim the name of Christ would turn to the simplicity of trusting Christ alone and desire to live for Him out of gratitude for all He has done for them (Romans 3-12).

One thought on “Indulgences are not Biblical”