A forewarning to readers that this post can be very disturbing. Perhaps what is most disturbing is what is shown here is consumed by the masses, particularly by teenagers.

It has been addressed that satan controls the music industry as music is a powerful influence over the minds of the masses. It has been revealed that a lot of music artists admitted to receiving their music from the spirit (demonic) realm and being controlled by a demonic spirit (or spirits), some times behind the guise of an alter ego. Is Billie Eilish another pop singer used for satan’s agenda?

I am 100% convinced Billie Eilish is controlled by the devil, even to the point of demonization. She seems to have several telltale symptoms of demonization. Billie admitted she suffers from Tourette Syndrome which I believe can be the consequence of demonization. She suffers from body dysmorphia, depression, and self-harm. As her fame increased, she said her nightmares have gotten more intense. She said she jumps the last few feet on her bed just in case there is a monster underneath her bed. She once tweeted “pain is good.” Billie said she thrives on people being afraid of her. She also suffered from uncharacteristic anxiety and panic attacks and said that she hates herself. She also claimed to have suffered from sleep paralysis which is demonic attacks and has claimed to have seen creatures outside her windows [source].

So, who is Billie Eilish? She was born in 2001 (so at the time this is posted that means she is at the tender age of 18 years old) and is a singer who is has become quite popular recently. Billie’s debut single Ocean Eyes was a viral hit and her debut EP has now racked up over 1.5 billion streams worldwide. Apple Music named Eilish an Up Next singer (a big deal in the industry), Forbes identified Billie as “the artist to watch in 2019”, and NME claimed that she’s the “most talked about teen on the planet”. Mainstream media labeled Billie Eilish as “the future of pop”. Billie also has appeared in many magazines, and she’s already modeling for all kinds of fashion projects. One of her songs was featured on the soundtrack of 13 Reasons Why, the controversial Netflix drama about teen suicide (interestingly, the teenage suicide rate spiked supposedly because of it according to a news report). She has over a whopping 20 million Instagram followers and 19 million subscribers on Youtube. This means her influence among tween and teens are very far-reaching. Her genre of music is characterized as pop, alternative rock, and misery music.

The lyrics of some of her songs are extremely dark. Some of her song’s lyrics are not only disturbing because of the content but also because many teenagers listen to it and idolize her. In one of her song’s lyrics, she said “I wanna end me” which promotes suicide. In her song Bellyache, the lyrics are about her killing her friends and about her being a psychopath. She talked about burning someone’s car in her song Watch. She also talked about stealing your soul and hiding you in her treasure chest in Hostage and the song takes the perspective of a serial killer!

Billie Eilish’s videos are very disturbing to the say the least. So disturbing that reading over several comments on one of her videos people were saying how they were scared watching it.

You see in her videos awful things such as confinement, ingesting poison, forced contact with repulsive insects, etc.

Let’s take a look at the song and video of Bury a Friend, which has over 200 million views on YouTube. The video gives a depiction from the perspective of the monster under the bed. “If you put yourself in that mindset, what is this creature doing or feeling?” Billie said. “The whole album clicked in my head… I immediately knew what it was going to be about, what the visuals were going to be, and everything in terms of how I wanted it to be perceived”. I surmise she got the idea from the demonic realm. Some popular musicians admitted to channeling their music or musical ideas from the spirit realm.

The following are screenshots of the music video Bury a Friend: 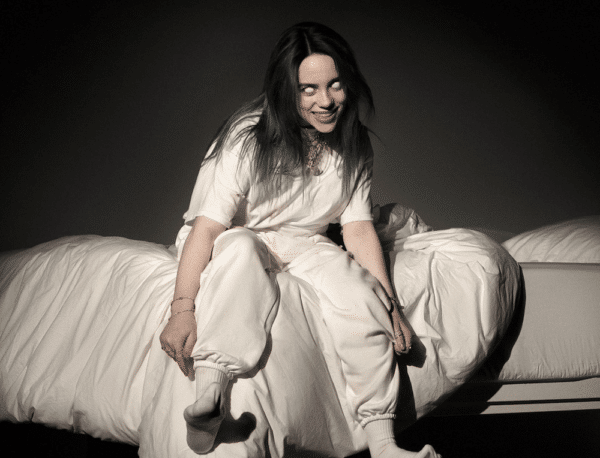 All white eyes are reminiscent of one who is demon-possessed.

In an interview, Billie stated that the video has something to do with the concept of sleep paralysis. Most people who experience this phenomenon feels an “evil presence” around them because it actually is caused by a demon or demons, despite what secularists say. For this reason, it is by some referred to as “a demon in the bedroom.” In bury a friend, Billie is the demon! Creepy!

As this is happening, Billie sings about a series of very disturbing things:

More disturbing images from the video:

At this point, she sings lyrics that promote suicide:

The second verse of the song explains that she’s dealing with what seems like to be an evil spirit that can help her become a star. I have no doubt that the enemy makes certain people celebrities to promote his agenda. However, there’s a cost.

Keep you in the dark, what had you expected?
Me to make you my art and make you a star
And get you connected?
I’ll meet you in the park, I’ll be calm and collected
But we knew right from the start that you’d fall apart
‘Cause I’m too expensive

The bridge of the song is where she said she has to sell her soul.

The Bible reads satan offered Jesus all the kingdoms of the world if Jesus worshiped him so the enemy does have the ability to give fame and fortune. But with the enemy, there is always a cost.

Demonic black eyes which is something you would see in a horror movie.

Here we have imagery of Billie being demon-possessed.

At the end of the video, Billie disappears from under the guy’s bed.

What seems to be the underlying theme behind the song is desperation, even suicide with the lyrics “I wanna end me.” The music video itself is depressing, dark, and macabre. Its message is simple: life is hopeless. Furthermore, the song’s bridge “gotta sell my soul” is very telling.

Lyrics of other songs

Depression and suicide are definite elements of the song. But what’s really problematic is that this song has now 200 Million views and counting. Just imagine the indoctrination and the subliminal message it sends to the young masses.

You should see me in a crown

After its debut for almost a year, it reached about 130 Million views on YouTube. The imagery seems to be very telling. In it, she wears a “crown with a cross” as if Billie seems to mock Christ. Or it could be the devil conditioning people to receive the Beast (the Antichrist) who is a counterfeit Christ that will have all authority on earth and is given a crown (Revelation 6:2). Whatever the case it’s disturbing, to say the least.

In her latest video of a song called all the good girls go to hell you can see Billie with angel wings fall from heaven much like satan (aka lucifer) fell from heaven as written in Isaiah 14:12 and Luke 10:18.

At the end of the video, you can see lucifer walking on earth while people burn in flames. Creepy!

all the good girls go to hell

Something is very wrong when your song contains a lyric that “my lucifer is lonely”!

Also, notice God is referred to as a “her.” It is reminiscent of Arianna Grande’s song God is a Woman. Interesting, considering Jesus called God, the Father.

XXXtenacion, a rapper who was murdered in 2018, was involved in very dark things.

What is the point of exposing all of this? It is to emphasize that one ought to shield ourselves and our children from the pollution of the world (James 1:27). If popular singers like her promote bleakness and darkness and romanticize death, imagine the number of youngsters being swept with it. The devil is real and the Bible reveals that he controls the world (1 John 5:19). The devil prowls like a lion to devour us (1 Peter 5:8) and children and teenagers are an easy target (John 10:10). We shouldn’t allow ourselves or our children to listen to music that comes from satan’s kingdom and the reasons why should be obvious. Be careful about what you allow through your ear gate and eye gate (Psalms 101:3). It’s no wonder the Bible warns to not love the world nor love the things in the world; and to not conform to it (1 John 2:15; Romans 12:2).

I hope Billie turns to the Savior, Jesus Christ, who loves her. He is the only one who can save her and deliver her from the darkness she is in.