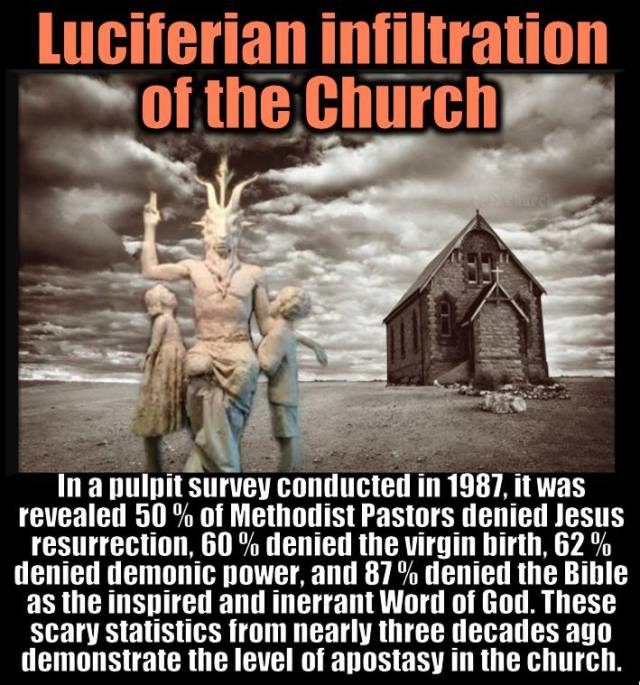 In 1998 the Harris group took a poll of over 7,000 clergy in the U.S. and found the following percentages of clergymen denying the virgin birth:

A recent pole found that most United Methodist Church pastors don’t believe the Bible. Polls have shown that at least 30 percent of UMC ministers do not believe Jesus Christ is God, and 82% say they do not believe the Bible is the perfect Word of God. As early as 1968 a widely publicized scientific survey by Jeffrey Harden which was published by the Washington University showed that about 60% of the Methodist clergy did not believe in the virgin birth and at least 50% did not believe in the bodily resurrection of Christ. A Gallup survey in 1982 revealed that 34% of Methodists believe a community service is more important than proclaiming the Gospel. (‘Way of Life Encyclopedia of the Bible & Christianity”, David Cloud)
http://bible-truth.org/msg33.html

Notice what the respected pollster Gallup discovered in regard to Methodist ministers. First, only 41% of Methodists believed (at that time) that “the Bible is the word of God and is not mistaken in its statements and teaching.” Further, only 29% of the Methodists believe that God created Adam and Eve—the beginning of human life. Additionally, only 42% of Methodist ministers believe in a personal devil. Edmund P.Clowney, “’Who Do Men Say that I Am?’ Beliefs of the Clergy,” Christianity Today, June 6, 1980, pp. 30-33. These and other statistics are discussed in our older work, Beware of False Teachers! http://truediscipleship.com/the-united-methodist-church/#_edn16