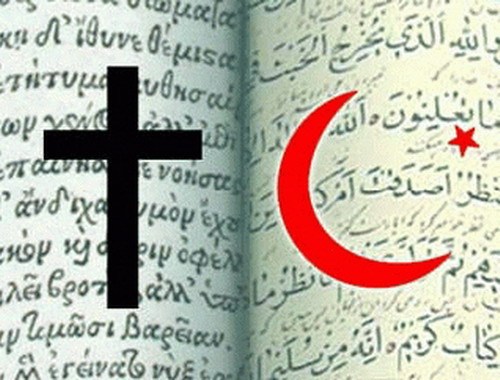 MUHAMMAD AND HIS DIETY SAID:

Quran (2:191-193) – “And slay them wherever ye find them, and drive them out of the places whence they drove you out, for persecution [of Muslims] is worse than slaughter [of non-believers]… but if they desist, then lo! Allah is forgiving and merciful. And fight them until persecution is no more, and religion is for Allah.”

Quran (2:244) – “Then fight in the cause of Allah, and know that Allah Heareth and knoweth all things.”

Quran (4:89) – “They but wish that ye should reject Faith, as they do, and thus be on the same footing (as they): But take not friends from their ranks until they flee in the way of Allah (From what is forbidden). But if they turn renegades, seize them and slay them wherever ye find them; and (in any case) take no friends or helpers from their ranks.”

Quran (9:29) – “Fight those who believe not in Allah nor the Last Day, nor hold that forbidden which hath been forbidden by Allah and His Messenger, nor acknowledge the religion of Truth, (even if they are) of the People of the Book, until they pay the Jizya with willing submission, and feel themselves subdued.”

Quran (9:73) – “O Prophet! strive hard against the unbelievers and the hypocrites and be unyielding to them; and their abode is hell, and evil is the destination.”

Quran (9:123) – “O you who believe! fight those of the unbelievers who are near to you and let them find in you hardness.”

Quran (48:29) – “Muhammad is the messenger of Allah. And those with him are hard (ruthless) against the disbelievers and merciful among themselves”

Qur’an (8:12) – “Remember thy Lord inspired the angels (with the message): “I am with you: give firmness to the Believers: I will instill terror into the hearts of the Unbelievers: smite ye above their necks and smite all their fingertips off them.”

Qur’an (24:2) – “The woman and the man guilty of adultery or fornication,- flog each of them with a hundred stripes: Let not compassion move you.”

Qur’an (5:33) – “The punishment of those who wage war against Allah and His messenger and strive to make mischief in the land is only this, that they should be murdered or crucified or their hands and their feet should be cut off on opposite sides…”

Quran (60:4) Indeed, there is for you a good example in Ibrahim and those with him when they said to their people: Surely we are clear of you and of what you serve besides Allah; we declare ourselves to be clear of you, and enmity and hatred have appeared between us and you forever until you believe in Allah alone..

Quran (9:30) And the Jews say: Ezra is the son of Allah, and the Christians say: The Messiah is the son of Allah. That is their saying with their mouths. They imitate the saying of those who disbelieved of old. Allah (Himself) fighteth against them. How perverse are they!

Quran (4:101) And when ye go forth in the land, it is no sin for you to curtail (your) worship if ye fear that those who disbelieve may attack you. In truth the disbelievers are an open enemy to you.

Quran (9:5) Then, when the sacred months have passed, slay the idolaters wherever ye find them, and take them (captive), and besiege them, and prepare for them each ambush. But if they repent and establish worship and pay the poor-due, then leave their way free. Lo! Allah is Forgiving, Merciful.

Quran (9:113) It is not for the Prophet, and those who believe, to pray for the forgiveness of idolaters even though they may be near of kin (to them) after it hath become clear that they are people of hell-fire.

Muslim (17:4196) – A married man confesses that he has adultery (four times, as required). Muhammad orders him planted in the ground and pelted with stones. According to the passage, the first several stones caused such pain that he tried to escape and was dragged back.

Muslim (1:30) – “The Messenger of Allah said: I have been commanded to fight against people so long as they do not declare that there is no god but Allah.”

Bukhari (8:387) – Allah’s Apostle said, “I have been ordered to fight the people till they say: ‘None has the right to be worshipped but Allah’. And if they say so, pray like our prayers, face our Qibla and slaughter as we slaughter, then their blood and property will be sacred to us and we will not interfere with them except legally.”

Bukhari (52:177) – Allah’s Apostle said, “The Hour will not be established until you fight with the Jews, and the stone behind which a Jew will be hiding will say. “O Muslim! There is a Jew hiding behind me, so kill him.”

Bukhari (11:626) – [Muhammad said:] “I decided to order a man to lead the prayer and then take a flame to burn all those, who had not left their houses for the prayer, burning them alive inside their homes.”

Bukhari (83:37) – “Allah’s Apostle never killed anyone except in one of the following three situations: (1) A person who killed somebody unjustly, was killed (in Qisas,) (2) a married person who committed illegal sexual intercourse and (3) a man who fought against Allah and His Apostle and deserted Islam and became an apostate.”

Bukhari (84:64-65) – “Allah’s Apostle: ‘During the last days there will appear some young foolish people who will say the best words but their faith will not go beyond their throats (i.e. they will have no faith) and will go out from (leave) their religion as an arrow goes out of the game. So, wherever you find them, kill them, for whoever kills them shall have reward on the Day of Resurrection.'”

JESUS AND HIS APOSTLES SAID:

Matthew 26:52 Then Jesus said to him, “Put your sword back into its place; for those who live by the sword, die by the sword.

Luke 1:79 (Jesus will) guide our feet into the path of peace.

John 18:36 “If my kingdom were of this world…my servants would fight”

Matt. 18:21-22 Then Peter came up and said to him, “Lord, how often shall my brother sin against me, and I forgive him? As many as seven times?” Jesus said to him, “I do not say to you seven times, but seventy times seven…”

Romans 12:17 Return no one evil for evil…live at peace with everyone.

Romans 14:19 Make every effort to do what leads to peace.

1 Corinthians 7:15 God has called us to live in peace.

2 Corinthians 10:4 The weapons we fight with are not the weapons of the world.

Ephesians 2:17 He preached peace to you who were far…and near.

Colossians 3:15 Let the peace of Christ rule in your heart…

1 Thessalonians 5:15 Do not return evil for evil.

2 Timothy 2:24 The servant of the Lord must be gentle to all.

Hebrews 12:14 Make every effort to live in peace with all men and be holy.

Ephesians 4:2-3 with all humility and gentleness, with patience, bearing with one another in love, eager to maintain the unity of the Spirit in the bond of peace.

Romans 13:8 Owe no one anything, except to love each other, for the one who loves another has fulfilled the law.

Titus 3:2 “Remind the Christians to speak evil of no man, to be no brawlers, but gentle, showing meekness to all men.”

Hebrews 12:14 “Follow Peace with all men and holiness, without which no man shall see the Lord.”

2 Timothy 2:24-25 The servant of the Lord must not strive; but be gentle unto all men, apt to teach, patient, in meekness instructing those that oppose themselves.

1 Peter 3:9 “See that none render evil for evil, or railing for railing, but contrariwise blessing.”

Romans 12:9 “Therefore if thine enemy hunger, feed him, if he thirst, give him drink.”

Romans 12:14 “Bless them that persecute you: bless and curse not.”

Romans 12:20 “Be not overcome of evil, but overcome evil with good.”

Romans 14:19 “Let us follow after the things that make for peace.”