“According to a Gallup poll, 20% of Americans believe in reincarnation today, largely because of the influence of Hinduism and other forms of occult practice. Another reason for this is the thousands of reports of alleged “past lives” episodes, which have convinced many that reincarnation is true. But “past-life” experiences are really self-deceptions, or even demonic deceptions; they are hypnotic-like experiences which cause people merely to think that they have lived before. Why would demons be interested in encouraging a belief in reincarnation? Simply because it is such an effective barrier to come to the Lord Jesus Christ for salvation. If men live through many lifetimes, then there is no biblical judgment at death, but Hebrews 9:27 teaches that there is. If men must work out their own salvation over many lifetimes, then Jesus Christ did not have to die on the cross for our sins, but 1 John 2:2, 1 Peter 2:24, and Romans 4:25 teach that He did. If Jesus Christ paid the full divine penalty for all our sin at the cross, there is more karma, so to speak, for us to work off over many lifetimes. In other words, if Christianity is true, then reincarnation must be false. All men and women will be judged by the living, eternal God, some to eternal life and some to eternal punishment (Matthew 25:46; Revelation 20:12-15).” 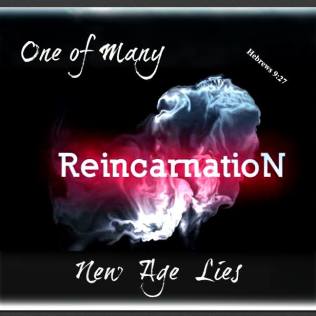 “27 And as it is appointed unto men once to die, but after this the judgment:”

“2 and he is the propitiation for our sins: and not for ours only, but also for the sins of the whole world.”

“24 who his own self bare our sins in his own body on the tree, that we, being dead to sins, should live unto righteousness: by whose stripes ye were healed.”

“25 who [Jesus] was delivered for our offences, and was raised again for our justification.”

“46 And these shall go away into everlasting punishment: but the righteous into life eternal.”

“12 And I saw the dead, small and great, stand before God; and the books were opened: and another book was opened, which is the book of life: and the dead were judged out of those things which were written in the books, according to their works. 13 And the sea gave up the dead which were in it; and death and hell delivered up the dead which were in them: and they were judged every man according to their works. 14 And death and hell were cast into the lake of fire. This is the second death. 15 And whosoever was not found written in the book of life was cast into the lake of fire.”

“God, I recognize that I have not lived my life for You up until now. I have been living for myself and that is wrong. Please forgive me of all of my sins, just as I forgive others. I need You in my life; I want You in my life. I acknowledge the completed work of Your only-begotten Son Jesus Christ in giving His life for me on the cross, I believe in my heart Jesus is Lord and was raised from the dead and I long to receive the forgiveness you have made freely available to me through this sacrifice. Come into my life now, Lord. Take up residence in my heart and be my king, my Lord, and my Savior. From this day forward, I will no longer be controlled by sin, or the desire to please myself, but I will follow You all the days of my life. Those days are in Your hands. I ask this in the Lord and GOD Jesus’ precious and holy name. Amen.”