The Unification Church Cult – “The Moonies” 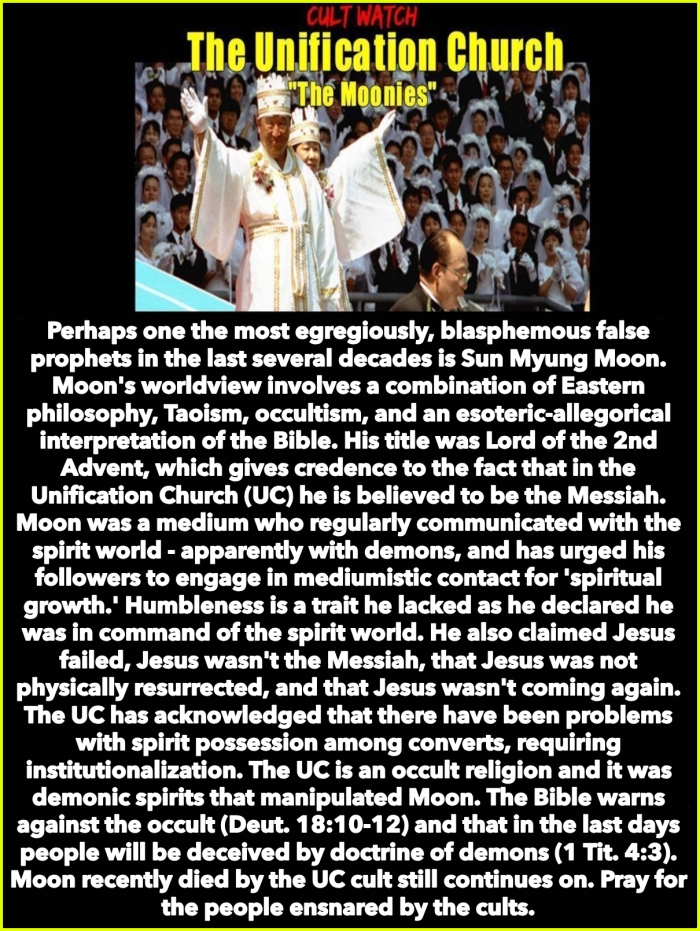 “Perhaps one the most egregiously, blasphemous false prophets in the last several decades is Sun Myung Moon. Moon’s worldview involves a combination of Eastern philosophy, Taoism, occultism, and an esoteric-allegorical interpretation of the Bible. His title was Lord of the 2nd Advent, which gives credence to the fact that in the Unification Church (UC) he is believed to be the Messiah. Moon was a medium who regularly communicated with the spirit world – apparently with demons, and has urged his followers to engage in mediumistic contact for ‘spiritual growth.’ Humbleness is a trait he lacked as he declared he was in command of the spirit world. He also claimed Jesus failed, Jesus wasn’t the Messiah, that Jesus was not physically resurrected, and that Jesus wasn’t coming again. The UC has acknowledged that there have been problems with spirit possession among converts, requiring institutionalization. The UC is an occult religion and it was demonic spirits that manipulated Moon. The Bible warns against the occult (Deut. 18:10-12) and that in the last days people will be deceived by doctrine of demons (1 Tit. 4:3). Moon recently died by the UC cult still continues on. Pray for the people ensnared by the cults.”