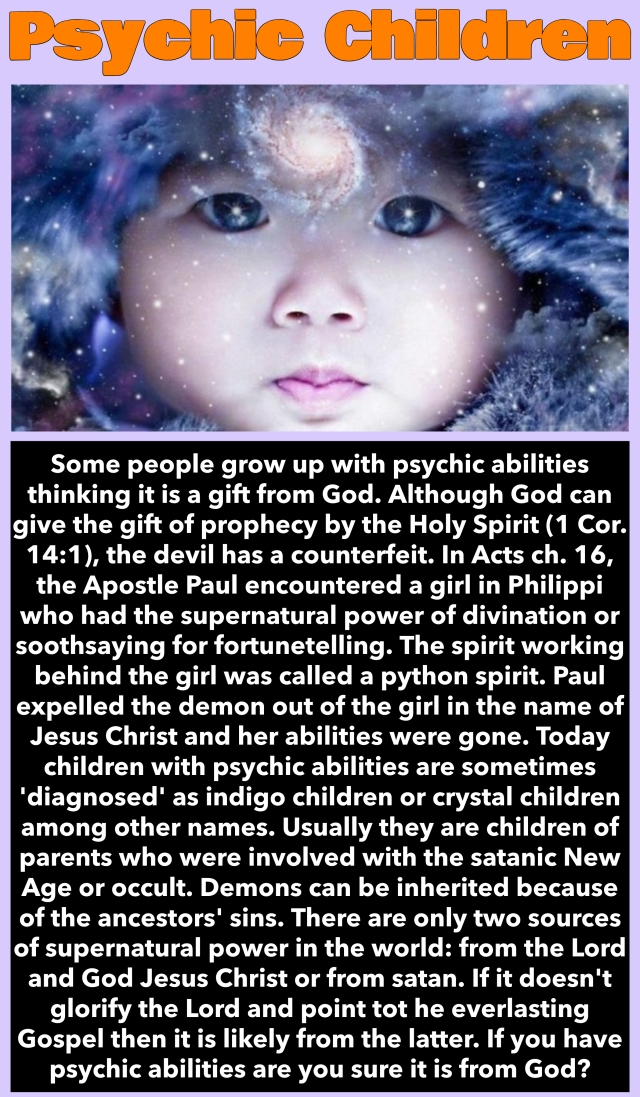 “Some people grow up with psychic abilities thinking it is a gift from God. Although God can give the gift of prophecy by the Holy Spirit (1 Cor. 14:1), the devil has a counterfeit. In Acts ch. 16, the Apostle Paul encountered a girl in Philippi who had the supernatural power of divination or soothsaying for fortunetelling. The spirit working behind the girl was called a python spirit. Paul expelled the demon out of the girl in the name of Jesus Christ and her abilities were gone. Today children with psychic abilities are sometimes ‘diagnosed’ as indigo children or crystal children among other names. Usually, they are children of parents who were involved with the satanic New Age or occult. Demons can be inherited because of their ancestors’ sins. There are only two sources of supernatural power in the world: from the Lord and God Jesus Christ or from satan. If it doesn’t glorify the Lord and point tot he everlasting Gospel then it is likely from the latter. If you have psychic abilities are you sure it is from God?”

The following is quoted from The Coming Darkness:

Russ Parker is vicar of Christ Church in Coalville, England. He has had 20 years of experience in deliverance ministry. In Battling the Occult, he lists several physical and spiritual problems associated with one’s parents’ occult or other sins, including one actual case of blindness from birth that was healed immediately upon exorcism. This man had apparently been possessed by an evil spirit at birth as the result of the criminal activity of his parents.

Many secular researchers have also noted there is a hereditary factor for psychic predisposition: Dr. Fodor, the psychoanalyst/psychic researcher referred to earlier, observes: “In most cases mediumship can be traced as a hereditary gift. If the heredity is not direct it is to be found in ancestors or collaterals.”

The compilation by the editors of Psychic magazine-Psychics: In Depth Interviews – reveals a consistent pattern. Most psychics interviewed admitted familial involvement. Famous mediums Arthur Ford, Eileen Garrett, and Douglas Johnson all had aunts who were mediums or psychics; Irene Hughes and Peter Hurkos both had psychic mothers; and virtually all 19 members of witch Sybil Leek’s nuclear and extended family were sympathetic to psychicism.

As with Edgar Cayce, Olga Worrall, and other well-known occultists, the predisposition often surfaces during childhood, especially in experiences with spirits. In the book cited above, Jeane Dixon, Eileen Garrett, Irene Hughes, Douglas Johnson, and “Kreskin” (who denies he is a psychic even though he practices automatic writing) also encountered psychic events at a young age.

Babies grow into young children, of course, and here the problems continue. Just as there are cases of child demonization recorded in the Bible (Luke 9:38,39) they are also recorded throughout history. Martin Ebon’s book Demon Children documents several cases of child demonization (or what are thought to be) and the terrible suffering and tragedy they bring; this is confirmed also by Samuel H. Young’s Psychic Children.

….Dr. Fodor indicates that even babies and small children of occultists may actually be possessed as a result of their parents’ sorcery:

“Inherited mediumship usually appears spontaneously and early in life, like artistic gifts. The five-month-old son of Mrs. Kate Fox-Jenken wrote automatically. Raps occurred on his pillow and on the iron railing of his bedstead almost everyday. The seven-month-old infant of Mrs. Margaret Cooper gave communications through raps. Aksakof in Animisme et Epiritisme records many instances of infantile mediumship. The child Alward moved tables that were too heavy for her normal strength. The nephew of Seymour wrote automatically when nine days old.

In Bonnemere’s Les Canisards and in Figuier’s Histoire du Merveilleux many cases are quoted of Canisard babies of 14-15 months of age and of infants who preached in French in the purest diction. “

7 thoughts on “Do You Have Psychic Abilities?”