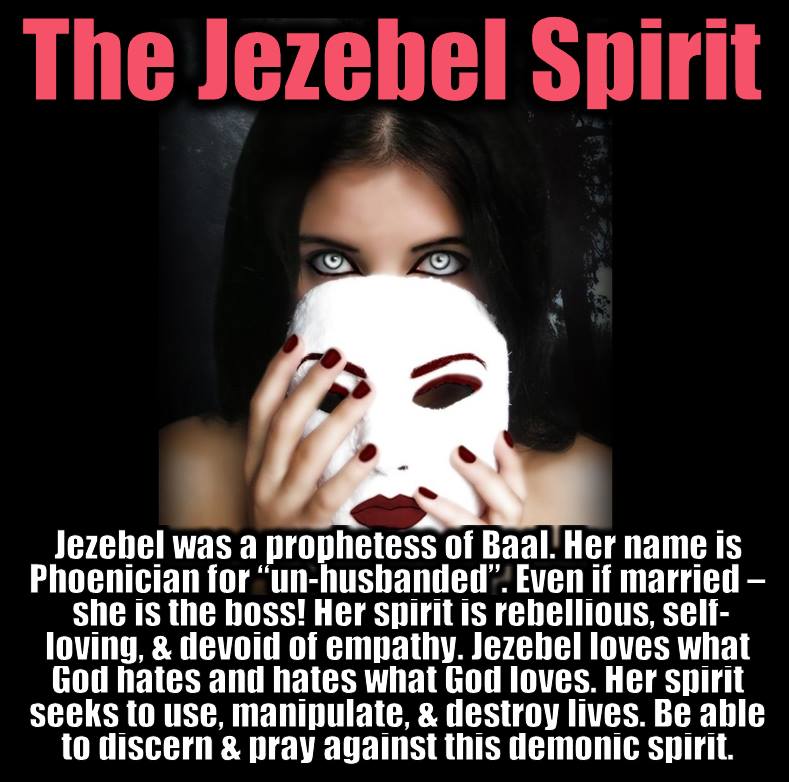 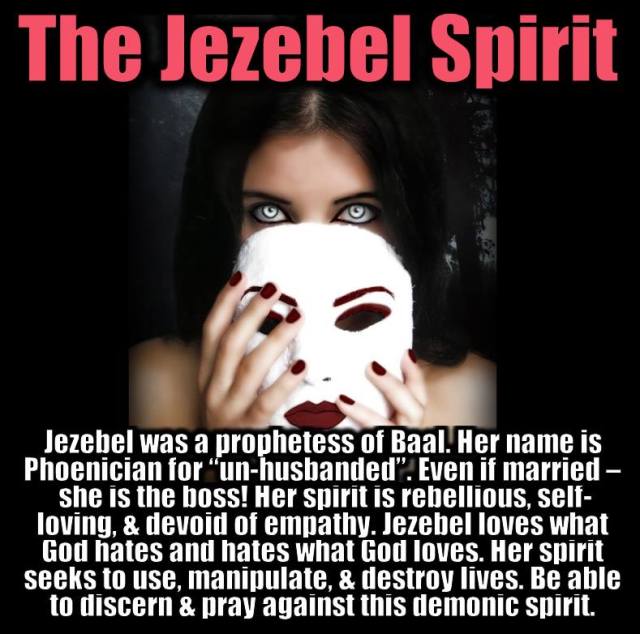 In the Bible, Jezebel was a powerful, wicked queen, and wife of a passive king called Ahab. She was a false prophetess who worshiped the false god, Baal. Baal was the god of prosperity,  harvests, fertility, and sex. (Does this sound like some of the modern-day gospels that some people preach?)

Child sacrifices were common. She was killed by several eunuchs at the order of commander Jehu.

Jezebel was a witch, and her spirit of witchcraft is still in operation today in the church, and in the world. It will take both a Jehu and the cooperation of the injured victims (spiritual eunuchs) to kill her again.

The Jezebel spirit is sociopathic. Behaviors you might see (3 or more):

1. They gain power by destroying others. It is like an adrenalin rush when they “win” over someone. They manage to get in positions of authority and are difficult to displace, once there.

2. They are controlling, manipulative, bossy.

3. They can either be war-like in their personalities so that they are intimidating.

So “sweet,” “perfect,” deceitful, “timid” and sneaky, they are able to fool and recruit others to join them. Sometimes they can be very charming and charismatic.

4. Critical of others, vicious to the point of bloodthirsty.

5. They are never wrong.

6. They recruit others in their charges against their victims. They act to persuade recruits and do not give up this activity until the recruits are won over. If the potential recruits do not cooperate and buy into things, this angers them.

7. They are a narcissist. While they can tend to be oversensitive themselves, they have no concern for the feelings of others. They are not sympathetic to their victims and tend to play the role of the victim themselves, in order to gain sympathy. This way the real victim is left stranded, and opposed by others if they ask for help. Being the center of attention really pleases them.

8. They lie, and they believe their own lie.

9. They are impulsive, failure to plan ahead. Chaotic at times.

10. They usually lack remorse after hurting someone. They feel justified.

11. They are consistent at being irresponsible.

12. They are very irritable, aggressiveness (open, or subtle), can be quick-tempered.

13. They fail to conform to social norms. This person is usually “outlier” or non-conformist.

14. Counseling will not help since they deny what they are.

15. They can claim religious sentiments, but very superficial in devotion. Born-again status is debatable, and unlikely, but would have to be evaluated on an individual basis.

16. The Jezebel are usually women, but you can find some who are men. The women tend to control their men with sex. And they pick passive men (Ahabs) so they can dominate them.

17. They are typically married. If single, could be lesbian, homosexual man, or promiscuous man.

18. They falsely accuse you, and they do NOT forgive you.

How to break this spirit:

*Since these individuals usually have achieved some level of authority, only someone who outranks them, or a group effort will work. If you are a woman, you need to be strong and self-confident. If you are a man, you need to be the same, and also not be influenced by threats or tears out of a woman. You also need to have enough male hormones to stand up to her. Also, if you are a man, and this is your wife, be sure the men in your support group can be trusted with her.

2. Gather facts about the person’s activity and behavior, be able to prove it. You have to start by addressing real behavior. You cannot start by telling someone “they have a spirit.” Be prepared to question the person why they behave that way. Make a list of wrongs. Be prepared.

3. Gather witnesses, who are also sincere believers (if in a church setting), or other credible authority figures, because the person will attack back, and deny everything. The aggressive types will use their authority to abuse, criticize, & threaten you, and try to have you discredited, or removed. The more sneaky types go into “victimhood” mode, immediately trying to solicit and recruit support, and make you look like you are the abusive one.

4. Isolate the person. Make sure their own recruits (buddies) are not around. It gets its power from others….so if you get it alone, it is more vulnerable, and more easily defeated. You have to remove the source of its power and “gang up” on it.

5. Confront the person with the facts, but expect denial. They will lie through their teeth!

6. Reject the person’s behavior based on the facts. Tell the person they will not be accepted back into the group unless they repent.

7. If the person repents – showing a willingness to change- then.

a. A church setting – as a group, bind and cast out the demonic spirit in Jesus name, and persist until it is gone. Expect high resistance, since it is a controlling (witch) spirit. There will be screaming and yelling before it is cast out. It will try to attack you and call you names. Also, expect and ignore the plays of “victimhood” during deliverance. Sometimes the spirit cycles between being the attacker, and being a victim. This is to confuse you, so do not give in.

b. A secular setting – document records, give warning that future behavior will be monitored. This is because their basic nature has not changed yet, and an eventual repeat of behavior will occur. If it does, the person needs to be fired.

8. Once the spirit is gone, the person needs support and counseling to examine how the spirit entered to begin with, so they can close the door on further attempts by the spirit to enter.

9. If the person does NOT repent, then cut off ties with the person, telling them forgiveness and deliverance is available to them. If you do not cut off ties, they will worry you to death and destroy your peace.

As one commenter stated: The Jezebel needs to learn the meaning of the word “NO!“

The underlying need is for attention and control, driven by self-pity, and a need to blame others for their mistakes, to maintain their reputation as a sweet and innocent person.

The main behavior is victimhood and denial of responsibility for wrongdoing.

They are irresponsible. They do not accept responsibility for their own behavior. It is always someone else’s fault.

Behavior may be “normal” until they make a mistake of some sort.

Then the blame is passed to someone else, and the jezebel becomes the false victim of the true victim.

This way she gets positive attention, the comfort, and rescue efforts of others, while the true victim gets branded as evil.

False victimhood should be distinguished from a true victim of any abuse, before deciding someone is a jezebel.

Self-pity is generally regarded as a negative emotion in that it does not generally help deal with adverse situations.

However, in a social context, it may result in either the offering of sympathy or advice.

Self-pity may be considered normal, and in certain circumstances healthy, so long as it is transitory and leads to either acceptance or a determination to change the situation.

Self Pity in Jezebels:

Either individually, or as a group, these people are dangerous. There can be legal losses, broken relationships, job loss, childcare custody disputes, mental illness, medical damages, loss of life, etc.

In a large social context, imagine an entire country creating chaos, violence, and murders over blaming true victims for criminal behaviors of others.

The Jezebel spirit in a culture draws its authority from other supporting (Ahab) cultures, which permit its behavior because it benefits them.

It is our responsibility to seek out the truth at any time, and not allow innocent victims to be blamed and persecuted as the guilty ones.

8 thoughts on “The Jezebel Spirit”