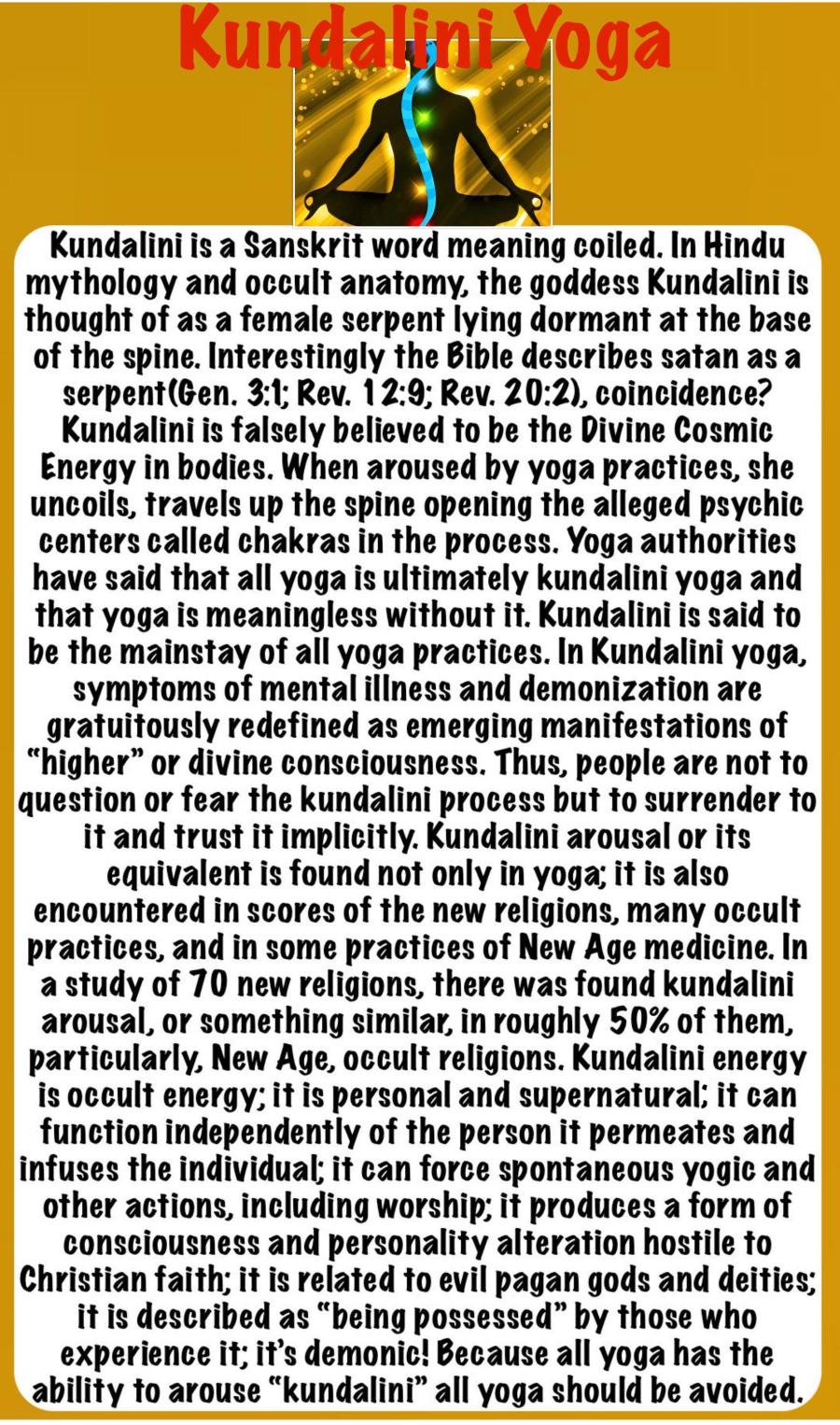 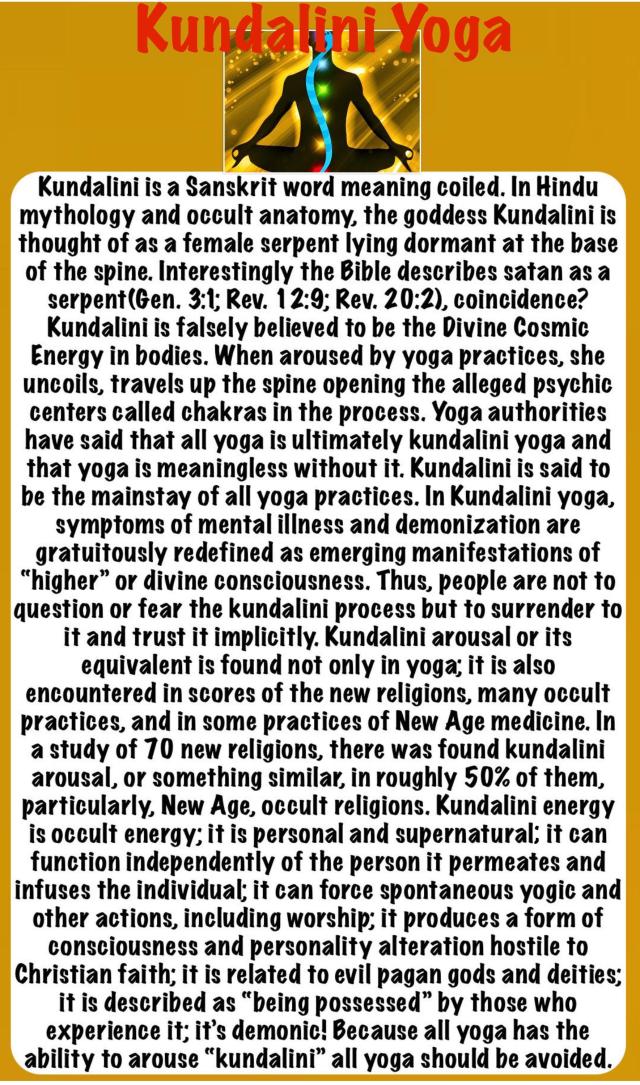 “Kundalini is a Sanskrit word meaning coiled. In Hindu mythology and occult anatomy, the goddess Kundalini is thought of as a female serpent lying dormant at the base of the spine. Interestingly the Bible describes satan as a serpent (Gen. 3:1; Rev. 12:9; Rev. 20:2), coincidence? Kundalini is falsely believed to be the Divine Cosmic Energy in bodies. When aroused by yoga practices, she uncoils, travels up the spine opening the alleged psychic centers called chakras in the process. Yoga authorities have said that all yoga is ultimately kundalini yoga and that yoga is meaningless without it. Kundalini is said to be the mainstay of all yoga practices. In Kundalini yoga, symptoms of mental illness and demonization are gratuitously redefined as emerging manifestations of “higher” or divine consciousness. Thus, people are not to question or fear the kundalini process but to surrender to it and trust it implicitly. Kundalini arousal or its equivalent is found not only in yoga; it is also encountered in scores of the new religions, many occult practices, and in some practices of New Age medicine. In a study of 70 new religions, there was found kundalini arousal, or something similar, in roughly 50% of them, particularly, New Age, occult religions. Kundalini energy is occult energy; it is personal and supernatural; it can function independently of the person it permeates and infuses the individual; it can force spontaneous yogic and other actions, including worship; it produces a form of consciousness and personality alteration hostile to Christian faith; it is related to evil pagan gods and deities; it is described as “being possessed” by those who experience it; it’s demonic! Because all yoga has the ability to arouse “kundalini” all yoga should be avoided.”

What Are the Symptoms of Kundalini?

NOTE: most of the references and quotes used here on the “Kundalini syndrome” are in support of it. I have put them in to enforce the fact that this is occultism and not of God. Even those in the occult that practice “Kundalini” and other forms of mediation have strong warnings for those who are NOT properly trained in its “releasing” and the physical, mental and emotional damage that occurs. Imagine how worse off the typical Christian is when thinking it’s of God and wanting more.

· “Kundalini-syndrome. This psycho-spiritual and transformative process is believed to occur in connection with a near-death experience, or with prolonged, intensive spiritual or contemplative practice, as practiced within a few sub-disciplines of meditation or yoga.”

· The process is not always sudden and dramatic, it can also start slowly and increase gradually in activity over time.

· If the accompanying symptoms unfold in an intense manner that destabilizes the person, the process is usually interpreted as a spiritual emergency.

· Studies have suggested some common criteria that describe this condition, of which the most prominent feature is a feeling of energy or heat rushing up the spine

· The feeling of cranial pressures

· The perception of inner sounds

· Vibrating or tickling sensations in the lower back

· Sensations of heat or cold moving through the body

· Vibrations and itching under the skin

· Spontaneous slowing or speeding of thoughts

· Experiencing oneself as larger than the physical body

The following are common manifestations of the risen Kundalini:

Outside of the short-term physical effects of Kundalini, nothing produces more wonder and curiosity than the reported mental effects. Along the path of raising Kundalini, yogis like Swami Saraswati reveal that some participants may experience mental clarity to the extent of supernatural ability.

Likewise, without the guidance of trained Kundalini instructors, a person can experience confusion, depression, hallucinations and other unpleasant mental disturbances.” Source

If you believe you have this spirit and want it expelled from you then feel free to contact me for prayer.