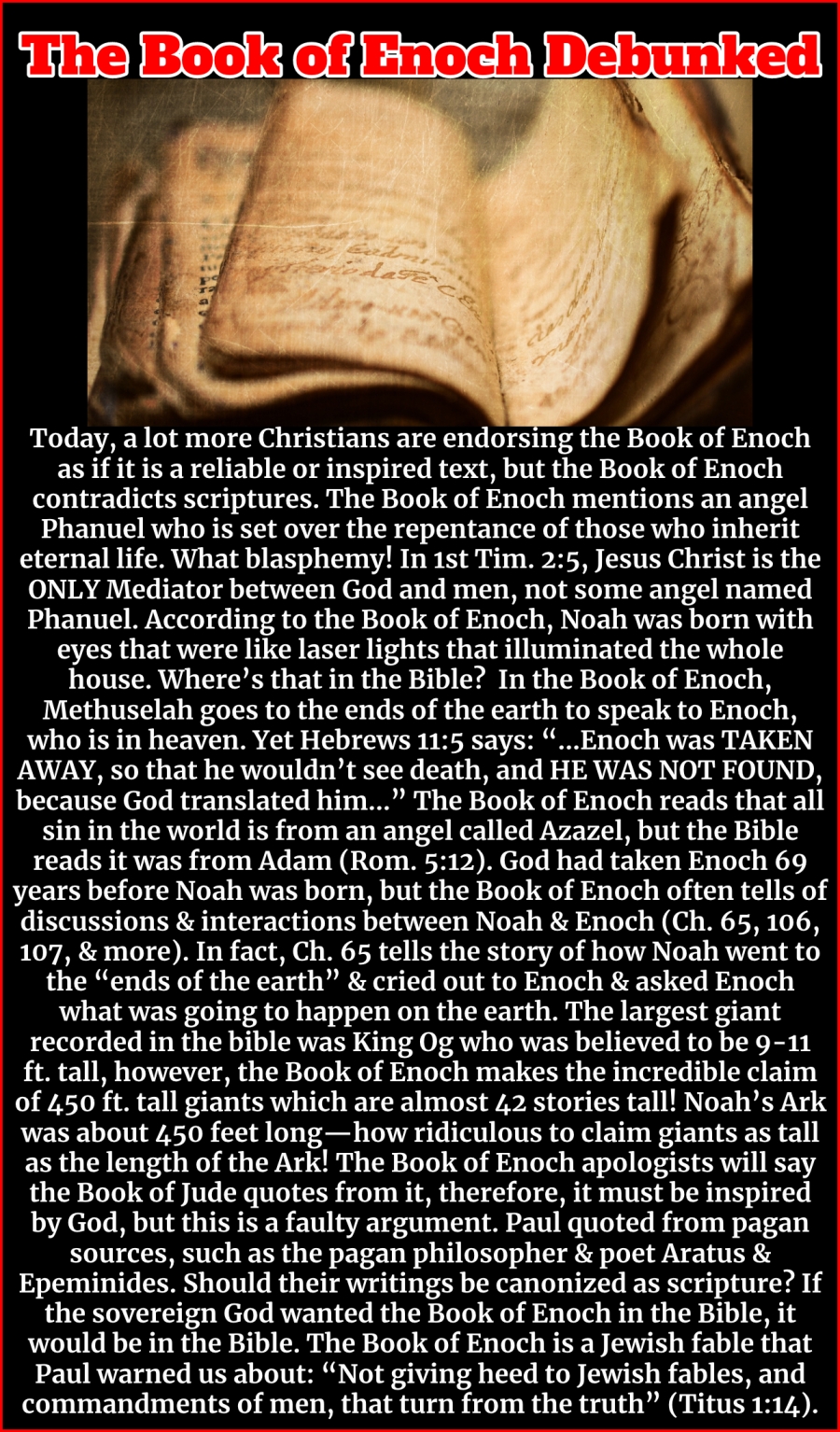 “Today, a lot more Christians are endorsing the Book of Enoch as if it is a reliable or inspired text, but the Book of Enoch contradicts scriptures. The Book of Enoch mentions an angel Phanuel who is set over the repentance of those who inherit eternal life. What blasphemy! In 1st Tim. 2:5, Jesus Christ is the ONLY Mediator between God and men, not some angel named Phanuel. According to the Book of Enoch, Noah was born with eyes that were like laser lights that illuminated the whole house. Where’s that in the Bible?  In the Book of Enoch, Methuselah goes to the ends of the earth to speak to Enoch, who is in heaven. Yet Hebrews 11:5 says: “…Enoch was TAKEN AWAY, so that he wouldn’t see death, and HE WAS NOT FOUND, because God translated him…” The Book of Enoch reads that all sin in the world is from an angel called Azazel, but the Bible reads it was from Adam (Rom. 5:12). God had taken Enoch 69 years before Noah was born, but the Book of Enoch often tells of discussions & interactions between Noah & Enoch (Ch. 65, 106, 107, & more). In fact, Ch. 65 tells the story of how Noah went to the “ends of the earth” & cried out to Enoch & asked Enoch what was going to happen on the earth. The largest giant recorded in the bible was King Og who was believed to be 9-11 ft. tall, however, the Book of Enoch makes the incredible claim of 450 ft. tall giants which are almost 42 stories tall! Noah’s Ark was about 450 feet long—how ridiculous to claim giants as tall as the length of the Ark! The Book of Enoch apologists will say the Book of Jude quotes from it, therefore, it must be inspired by God, but this is a faulty argument. Paul quoted from pagan sources, such as the pagan philosopher & poet Aratus & Epeminides. Should their writings be canonized as scripture? If the sovereign God wanted the Book of Enoch in the Bible, it would be in the Bible. The Book of Enoch is a Jewish fable that Paul warned us about: “Not giving heed to Jewish fables, and commandments of men, that turn from the truth” (Titus 1:14).”

One translation of the Book of Enoch has the giants as 4,500 feet tall! But even using another translation that reads it is 450 feet tall, it still is incredible.

It reads in Enoch 7:12 “Whose stature was each three hundred cubits. These devoured all which the labor of men produced; until it became impossible to feed them;”

“And the whole earth has been corrupted through the works taught by Azazel: to him ascribe all sin.” Enoch Chapter 10:9

About Noah having illuminating eyes in the Book of Enoch: “His body was white as snow and red as the blooming of a rose, and the hair of his head and his long locks were white as wool and his eyes beautiful. And when he opened his eyes, he lighted up the whole house like the sun, and the whole house was very bright. And thereupon he arose in the hands of the midwife, opened his mouth, and conversed with the Lord of righteousness.” Enoch Chapter 106:2-3

“And his father Lamech was afraid of him and fled, and came to his father Methuselah. And he said unto him: ‘I have begotten a strange son, diverse from and unlike man, and resembling the sons of God of heaven; and his nature is different and he is not like us, and his eyes are as the rays of the sun, and his countenance is glorious. And it seems to me he is not sprung from me but from angels…” Enoch chapter 106:4-6

Timeline of the death/birth of patriarchs [Source 1,2].

Noah supposedly visits Enoch in the Book of Enoch:

“65:1 And in those days Noah saw the earth that it was curved, and that its destruction was near.65:2 And he lifted up his feet from there, and went to the ends of the earth, and called to his grandfather Enoch; 65:3 and Noah said with a bitter voice: “Hear me! hear me! hear me!” three times.65:3 And he said to him: “Tell me what is it that has been done on the earth, that the earth is so tired out 65:4and shaken? May I not be destroyed with it!”65:4 And after this time there was a great trembling on the earth, and a voice was heard from heaven, and I fell on my face.65:5 And Enoch, my grandfather, came and stood by me and said to me: “Why dost thou so bitterly and lamentingly cry to me?”

Paul quotes from Aratus in Acts 17:28, “For in him we live, and move, and have our being; as certain also of your own poets have said, For we are also his offspring.”

And from Epimenides in Titus 1:12, “One of themselves, even a prophet of their own, said, the Cretians are alway liars, evil beasts, slow bellies.”

Judge all things against scripture. If it contradicts scripture, then it is not of God.

3 thoughts on “Beware of the Book of Enoch”