John 18:20 — “I spake openly to the world; I ever taught in the synagogue, and in the temple, whither the Jews always resort; and in secret have I said nothing.” Throughout Scripture, we are told to imitate Jesus Christ, and let Him serve as our example. Thus, since Jesus Christ never, ever did anything in secret, we are not to do anything in secret, either. The true Christian walk is to be the utmost in transparency possible.”

Matthew 5:34-46 — “Again, ye have heard that it hath been said by them of old time, Thou shalt not forswear thyself, but shalt perform unto the Lord thine oaths: But I say unto you, Swear not at all; neither by heaven; for it is God’s throne: Nor by the earth; for it is his footstool: neither by Jerusalem; for it is the city of the great King. Neither shalt thou swear by thy head, because thou canst not make one hair white or black. But let your communication be, Yea, yea; Nay, nay: for whatsoever is more than these cometh of evil.”

1 Corinthians 10:20-22– “20 Rather, that the things which the Gentiles sacrifice they sacrifice to demons and not to God, and I do not want you to have fellowship with demons. 21 You cannot drink the cup of the Lord and the cup of demons; you cannot partake of the Lord’s table and of the table of demons. 22 Or do we provoke the Lord to jealousy? Are we stronger than He?”

A rare look inside Skull and Bones 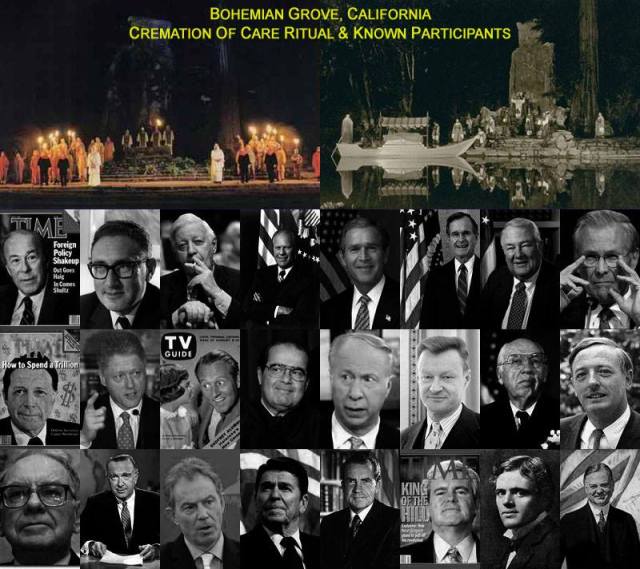 But what kind of spirit is working behind the elite? 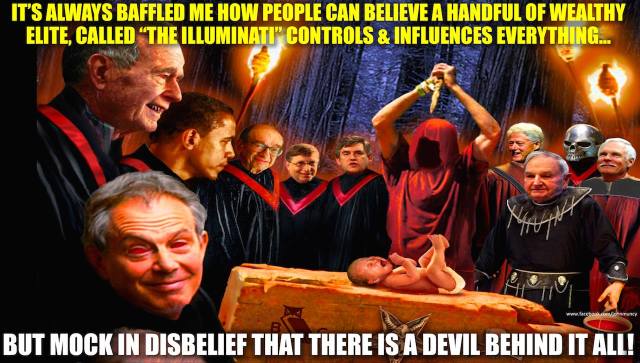 The following are thoughts from one Pastor:

According to the Word of God, Satan is NOT in hell right now, but actually has access to heaven, (Job 1:7; Job 2:2) while he also freely roams this planet like a roaring lion, “seeking whom he may devour” (1 Peter 5:8) This planet was/is part of his domain at this point, due to the voluntary rebellion of the free-will agents of this planet (us). Jesus called Satan, “the prince of this world”, while referring to his ultimate judgment…

John 12:31
“Now is the judgment of this world: now shall THE PRINCE OF THIS WORLD be cast out.”

The apostle Paul calls him “the prince of the power of the air”, (referring to the actual region that surrounds our planet), and says he can influence people’s minds by blinding them, as they continue to walk in disobedience to God…

Ephesians 2:2
“Wherein in time past ye walked according to the course of this world, according to THE PRINCE OF THE POWER OF THE AIR, the spirit that now worketh in the children of disobedience:”

Paul further calls Satan, “the god of this world”. Notice the title is a little “g”, not a big “G”, because the Lord God Almighty alone is Lord of this planet (Psalm 24:1), but Satan leads/presides over “the social order”, or “this world”…

2 Corinthians 4:4
“In whom the god of this world hath blinded the minds of them which believe not, lest the light of the glorious gospel of Christ, who is the image of God, should shine unto them.”

This blindness is also called deception. Satan deceives people with his lies and schemes. But, it’s only going to get worse! The deception already runs deep, but during the latter part of the last days, known as “the Great Tribulation’, literally ALL HELL BREAKS OUT on this planet and the entire world falls into even deeper deception because Satan and his rebels will be thrown completely out of heaven’s dimension and will be thrown back down and confined to this planet…

Revelation 12:9
“And the great dragon was cast out, that old serpent, called the Devil, and Satan, WHICH DECEIVETH THE WHOLE WORLD: he was cast out into the earth, and his angels were cast out with him.”

When I watch the way things are developing around us and see how the media seems to lead people, like a pack of wolves – ready to devour, full of hatred and disdain for anything decent or right – I see it more than a handful of some wealthy elites who sit around a table and demise their plans! I see a “spirit at work” behind them, the Bible calls it the, “spirit of antichrist”. (1 John 4:3)

It’s not THE antichrist, but it is the “spirit” that works behind the scene, preparing the way for “the man of sin” (2 Thessalonians 2:3) when the red carpet gets rolled out for him. But right now, we are being eye-witnesses of this and the power of demonic persuasions as it plays out before our eyes. If you play close attention to this, you can almost “see” it show up in the reaction of the media, especially the powerful voices in Hollywood and the music industry! It’s almost as if they are becoming portals for “another world” – as if they are “zombies” being forced by “another force”. It’s a little eerie to watch if you can look past the physical and see something “behind it all”.

I KNOW – SOME OF YOU JUST CHUCKLED IN MOCKERY RIGHT THEN – but you can completely believe it’s George Soros and a handful of powerful men of the illuminati. You’re convinced that most of the popular Musicians/Singer and the Hollywood Elites are a direct part of the plan, and that every time one of them dies, it’s a “sacrifice” to the Illuminati. You’re convinced that their hand gestures in their performances carry secret messages to ensure their popularity among the crowds. SOMEBODY IS BEING DECEIVED, ALRIGHT…

Listen friend, way before conspiracies dominated the internet, God’s Word spoke of a power behind all this. And it’s not some small group of multibillionaires who “control the world”. Oh, I’m sure they wish they could. But it is something much, much bigger than some naked, drunk rich men who worship some 40-foot owl at some secret society meeting at the Bohemian Grove.

I WANT TO REMIND YOU THAT MEN ARE JUST THAT – MERE FLESH AND BLOOD MEN.

Sure, they may have some power and some influence, but it is NOTHING compared to the real power and influence that exists behind our flesh and blood existence. There is a vast system of power behind our level that works! It’s divided up into four divisions:

Ephesians 6:12
“For we wrestle not against flesh and blood, but against principalities, against powers, against the rulers of the darkness of this world, against spiritual wickedness in high places.”

Clearly Paul taught that our fight goes much deeper than a physical world conflict, it delves into the “darkness of this world”, an authority system that plagues mankind daily, trying to influence and manipulate gullible human beings. As weird and far-out as this may seem to some, it nevertheless is an underlining truth found throughout the Word of God.

AND WHETHER YOU WILL EVER RECOGNIZE IT OR NOT WILL NOT CHANGE THE TRUTH OF IT ALL. You don’t have to be very perspective to detect something “unnatural” is happening. There seems to be another thing going on just below the surface of our detection that seems to have sway over our society.

Could that something be just a handful of crazy rich men – or could it be something more sinister than that?