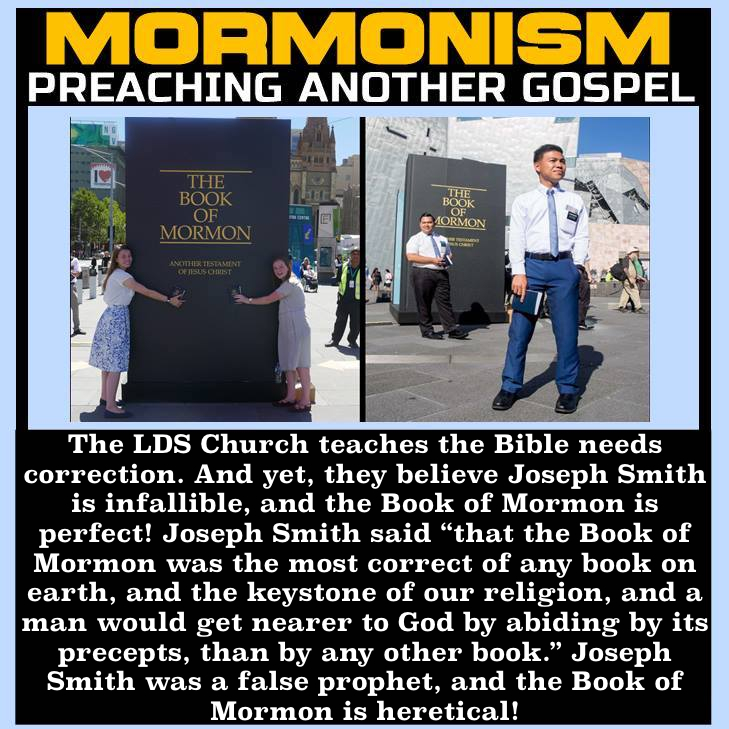 “But though we, or an angel from heaven, preach any other gospel unto you than that which we have preached unto you, let him be accursed.” -Galatians 1:8

“I told the brethren that the Book of Mormon was the most correct of any book on earth, and the keystone of our religion, and a man would get nearer to God by abiding by its precepts, than by any other book.” (History of the Church, 4:461.)

“There is no error in the revelations Joseph taught!”
– Apostle Neal A. Maxwell, Sermons Not Spoken, p.6

“Just a few scant days before his martyrdom, Joseph affirmed:
‘I never told you I was perfect; but there is no error in the revelations which I have taught. Must I, then, be thrown away as a thing of naught?’”
– The Teachings of the Prophet Joseph Smith, p. 368

However, DNA debunks a claim made in the Book of Mormon:

“In Losing a Lost Tribe: Native Americans, DNA, and the Mormon Church (Signature Books), research scientist Simon G. Southerton of Canberra, Australia, notes that none of the nearly 7,500 DNA-tested Native Americans shows any link to ancient Israel. More than 99 percent show an Asian heritage. The Book of Mormon, however, says that Israelites emigrated to the Americas 2,600 years ago, with the now-extinct Lamanites and Nephites becoming the ancestors of American Indians.” Source

Joseph Smith bragged that he did more than Jesus to keep a church together:
“God is in the still small voice. In all these affidavits, indictments, it is all of the devil–all corruption. Come on! ye prosecutors! ye false swearers! All hell, boil over! Ye burning mountains, roll down your lava! for I will come out on the top at last. I have more to boast of than ever any man had. I am the only man that has ever been able to keep a whole church together since the days of Adam. A large majority of the whole have stood by me. Neither Paul, John, Peter, nor Jesus ever did it. I boast that no man ever did such a work as I. The followers of Jesus ran away from Him; but the Latter-day Saints never ran away from me yet . . . ” (History of the Church, vol. 6, p. 408-409).

Joseph Smith proclaimed a false prophecy (one of several).
“. . .I prophesy in the name of the Lord God of Israel, unless the United States redress the wrongs committed upon the Saints in the state of Missouri and punish the crimes committed by her officers that in a few years the government will be utterly overthrown and wasted, and there will not be so much as a potsherd left . . . ” (History of the Church, vol. 5, p. 394).

What does the Bible say about those who make a false prophecy?

“But the prophet, which shall presume to speak a word in my name, which I have not commanded him to speak, or that shall speak in the name of other gods, even that prophet shall die. 21 And if thou say in thine heart, How shall we know the word which the Lord hath not spoken? 22 when a prophet speaketh in the name of the Lord, if the thing follow not, nor come to pass, that is the thing which the Lord hath not spoken, but the prophet hath spoken it presumptuously: thou shalt not be afraid of him.” – Deut. 18:20-22

Joseph Smith said that God was not always God.
“We have imagined and supposed that God was God from all eternity. I will refute that idea, and take away the veil, so that you may see. These are incomprehensible ideas to some, but they are simple. It is the first principle of the Gospel to know for a certainty the Character of God, and to know that we may converse with him as one man converses with another, and that he was once a man like us; yea, that God the Father of us all, dwelt on an earth, the same as Jesus Christ himself did, and I will show it from the Bible”(Teachings of the Prophet Joseph Smith, pp.345-346. Italics in original).

Joseph Smith said there are many gods.
“Hence, the doctrine of a plurality of Gods is as prominent in the Bible as any other doctrine. It is all over the face of the Bible . . . Paul says there are Gods many and Lords many . . . but to us there is but one God–that is pertaining to us; and he is in all and through all,” (History of the Church, vol. 6, p. 474). “In the beginning, the head of the Gods called a council of the Gods; and they came together and concocted a plan to create the world and people it,” (Journal of Discourses, vol. 6, p. 5).

Let’s compare his statement to scripture:

“Ye are my witnesses, saith the LORD [Yahweh], and my servant whom I have chosen: that ye may know and believe me, and understand that I am he: before me there was no God formed, neither shall there be after me.” (Isaiah 43:10)

“Fear ye not, neither be afraid: have not I told thee from that time, and have declared it? ye are even my witnesses. Is there a God beside me? yea, there is no God; I know not any.”(Isaiah 44:8)

“6 Thus saith the Lord [Yahweh] the King of Israel, and his redeemer the Lord of hosts; I am the first, and I am the last; and beside me there is no God.“ (Isaiah 44:6)

Hosea 13:4 — “Yet I am the LORD [Yahweh] thy God from the land of Egypt, and thou shalt know no god but me; for there is no savior beside me.”

The Biblical truth about the Trinity, which affirms monotheism.

Joseph Smith falsely said God was once a man.
“God himself was once as we are now, and is an exalted Man, and sits enthroned in yonder heavens . . . I say, if you were to see him to-day, you would see him like a man in form–like yourselves, in all the person, image, and very form as a man . . . it is necessary that we should understand the character and being of God, and how he came to be so; for I am going to tell you how God came to be God. We have imagined and supposed that God was God from all eternity,  I will refute that idea, and will take away and do away the veil, so that you may see . . . and that he was once a man like us; yea, that God himself the Father of us all, dwelt on an earth the same as Jesus Christ himself did.” (Journal of Discourses, vol. 6, p. 3).

Joseph Smith actually said that there are men living on the moon who dress like Quakers and live to be nearly 1000 years old. Since he was wrong about the moon, is it safe to trust him regarding the way to Heaven? (The Young Woman’s Journal, vol. 3, p. 263-264. See reprint inMormonism–Shadow or Reality? by Jerald and Sandra Tanner, p. 4.)

“When the Mormon missionaries come knocking at your door, there is more than meets the eye. They say they are Christians, but there’s a lot they are hiding from you! What would it look like if they were actually honest? Let’s find out!”

2 thoughts on “Mormons Preach Another Gospel”