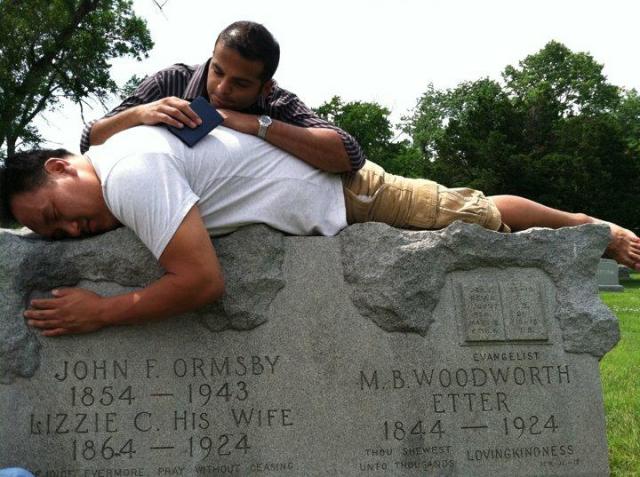 Grave sucking, also known as grave soaking or mantle grabbing, is the act of lying across the physical grave of a deceased preacher or evangelist for the purpose of “pulling out” the power of the Holy Spirit, a power that was purportedly “trapped” within the body upon the person’s death. The aberrant practice of grave sucking was initiated within the Charismatic movement and Word of Faith teachings, which are an amalgamation of orthodox Christianity and mysticism. Videos and images across the internet show grave suckers kneeling at or lying across the grave plots or gravestones of famous figures such as C. S. Lewis, John Calvin, or Charles Finney in hopes of “grabbing” the abandoned spiritual mantle or “soaking up” an anointing like a sponge.

Grave sucking or mantle grabbing is based upon the idea that the spiritual calling of an individual who has died may be reclaimed and used by another person. The theory is that God uses the Holy Spirit to “anoint” certain believers with a specific purpose, such as healing or prophecy, but, when the person dies, God’s work is thwarted. Thus, the Holy Spirit is “wasted,” lying upon the bones and unable to continue the calling. Unrecovered anointing is apparently available to anyone who would physically come and claim it. This superstitious practice is blatantly unbiblical, spiritually dangerous, and tremendously misleading for uninformed believers.

All power comes from God (Job 26:14; Matthew 19:26)—not from gravesites. Our individual life’s purpose is given by God Himself (1 Corinthians 7:17); another believer’s empowerment cannot be “sucked out” or “grabbed” from a corpse. To ascribe spiritual power to the bones of the dead, no matter how godly the deceased was in life, is idolatry (Exodus 20:3; Isaiah 42:8; John 4:24). The Holy Spirit resides in every believer (John 14:16–17; 1 Corinthians 6:19–20)—not just “anointed saints.” The Holy Spirit cannot be trapped by the death of a human being; the teaching of grave sucking objectifies the Holy Spirit and limits His power to certain locales.

A possible “proof text” for grave sucking is 2 King 13:21, in which a dead man is thrown into an open grave, and, when his body touches the bones of Elisha, the man is resurrected. This biblical account could be used to show that power or “anointing” is still present in a prophet’s bones after death. However, there is a major difference between the biblical event and the modern concept of grave sucking, namely, the recipient of the power was dead. No one was seeking a mantle or an anointing; God simply chose to perform a resurrection, honoring the memory of His prophet in the process.

At its root, grave sucking is founded upon a misunderstanding of the mantle or cloak the prophets of the Bible sometimes wore as a sign of their calling from God (1 Kings 19:13; 1 Samuel 15:27). Most well-known is the story of the prophet Elijah passing his mantle on to his protégé Elisha. The Bible shows Elijah using his cloak as a symbol of his ministry and God’s authority (1 Kings 19:15–16, 19; 2 Kings 2:1–11). After Elijah was translated into heaven, Elisha picked up the mantle and became Israel’s new prophet (2 Kings 2:14). The passing of the mantle was a symbolic act, however; a physical object has no inherent spiritual power. Like many Old Testament objects and events, the mantle was “a shadow of the good things that are coming—not the realities themselves” (Hebrews 10:1).

The grave sucking phenomenon originated in Bill Johnson’s Bethel Church in Redding, California, an organization associated with other unconventional practices such as Sozo prayer and heretical movements such as the Toronto Blessing and the New Apostolic Reformation. Conflicting sources claim grave sucking is an ongoing joke among students from the Bethel School of Supernatural Ministry, which, if true, would be a tragic mishandling of biblical truth (2 Timothy 2:15). Even Charismamag, a Charismatic magazine, condemns grave sucking in no uncertain terms. Yet Bill Johnson says in the book Physics of Heaven, “There are anointings, mantles, revelations and mysteries that have lain unclaimed, literally where they were left, because the generation that walked in them never passed them on. I believe it’s possible for us to recover realms of anointing, realms of insight, realms of God that have been untended for decades simply by choosing to reclaim them and perpetuate them for future generations” (quoted by Judy Franklin and Ellyn Davis in The Physics of Heaven: Exploring the Mysteries of God in Sound, Light, Energy, Vibrations, and Quantum Physics, Chapter 4: “Recovering Our Spiritual Inheritance,” Shippensburg, Penn.: Destiny Image Publishers, Inc., 2012). Whether sincere or facetious, the practice of grave sucking, grave soaking, or mantle grabbing has led many believers astray.

To visit the grave of a departed man or woman of God could certainly be a blessing or offer encouragement of faith through personal reflection, but any positive effects would come from God Himself (James 1:17)—not from the bones of the dead or some kind of mystical power trapped therein. All believers are already anointed, chosen for a specific purpose in furthering God’s Kingdom (2 Corinthians 1:21–22; 1 John 2:20). We need go no further than on our knees to find true purpose from God (Romans 12:2). We walk by faith, not by sight, and not by sucking.

Another person involved with grave sucking is Benny Hinn who claims he felt the anointing at Mystic Aimee Semple Mcpherson’s grave:

“I felt a terrific anointing when I was there. I actually, I—I, hear this, I trembled when I visited Aimee’s tomb. I was shaking all over. God’s power came all over me. … I believe the anointing has lingered over Aimee’s body. I know this may be shocking to you. … And I’m going to take David [Palmquist] and Kent [Mattox] and Sheryl [Palmquist] this week. They’re gonna come with me. You—you—you gonna feel the anointing at Aimee’s tomb. It’s incredible. And Kathryn’s. It’s amazing. I’ve heard of people healed when they visited that tomb. They were totally healed by God’s power. You say, ‘What a crazy thing.’ Brother, there’s things we’ll never understand. Are you all hearing me?” Source

This practice is definitely not Biblical!

One thought on “Grave Soaking or Grave Sucking”