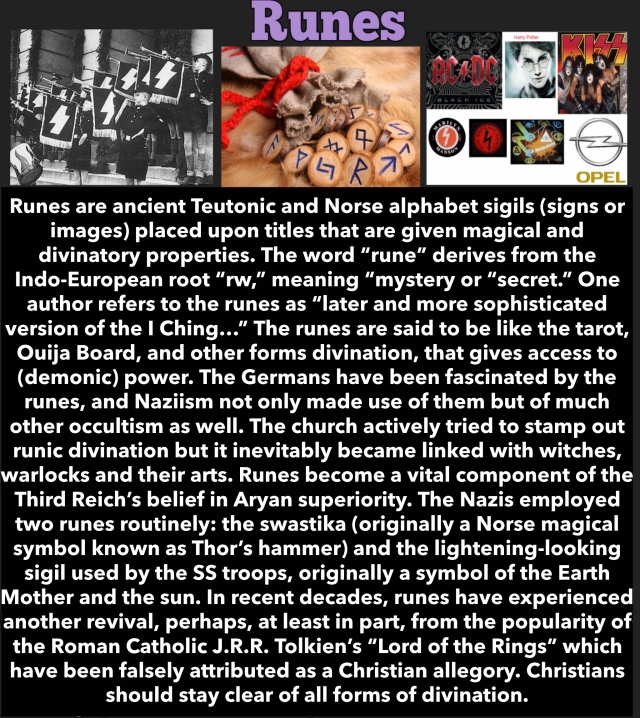 “Runes are ancient Teutonic and Norse alphabet sigils (signs or images) placed upon titles that are given magical and divinatory properties. The word “rune” derives from the Indo-European root “rw,” meaning “mystery or “secret.” One author refers to the runes as “later and more sophisticated version of the I Ching…” The runes are said to be like the tarot, Ouija Board, and other forms divination, that gives access to (demonic) power. The Germans have been fascinated by the runes, and Naziism not only made use of them but of much other occultism as well. The church actively tried to stamp out runic divination but it inevitably became linked with witches, warlocks and their arts. Runes become a vital component of the Third Reich’s belief in Aryan superiority. The Nazis employed two runes routinely: the swastika (originally a Norse magical symbol known as Thor’s hammer) and the lightening-looking sigil used by the SS troops, originally a symbol of the Earth Mother and the sun. In recent decades, runes have experienced another revival, perhaps, at least in part, from the popularity of the Roman Catholic J.R.R. Tolkien’s “Lord of the Rings” which have been falsely attributed as a Christian allegory. Christians should stay clear of all forms of divination.”

More examples of runes, some hidden in plain sight: