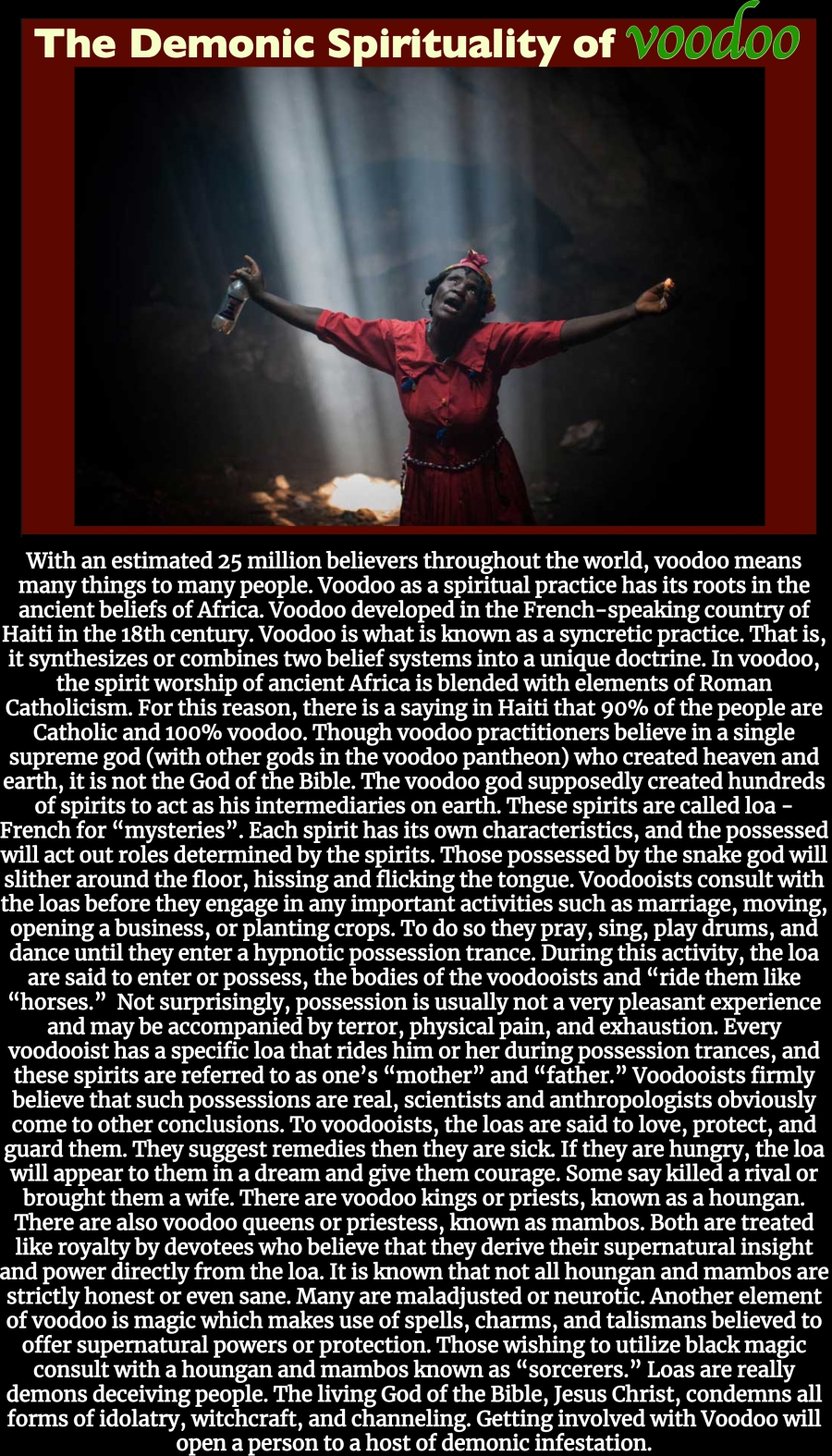 “With an estimated 25 million believers throughout the world, voodoo means many things to many people. Voodoo as a spiritual practice has its roots in the ancient beliefs of Africa. Voodoo developed in the French-speaking country of Haiti in the 18th century. Voodoo is what is known as a syncretic practice. That is, it synthesizes or combines two belief systems into a unique doctrine. In voodoo, the spirit worship of ancient Africa is blended with elements of Roman Catholicism. For this reason, there is a saying in Haiti that 90% of the people are Catholic and 100% voodoo. Though voodoo practitioners believe in a single supreme god (with other gods in the voodoo pantheon) who created heaven and earth, it is not the God of the Bible. The voodoo god supposedly created hundreds of spirits to act as his intermediaries on earth. These spirits are called loa – French for “mysteries”. Each spirit has its own characteristics, and the possessed will act out roles determined by the spirits. Those possessed by the snake god will slither around the floor, hissing and flicking the tongue. Voodooists consult with the loas before they engage in any important activities such as marriage, moving, opening a business, or planting crops. To do so they pray, sing, play drums, and dance until they enter a hypnotic possession trance. During this activity, the loa are said to enter or possess, the bodies of the voodooists and “ride them like “horses.”  Not surprisingly, possession is usually not a very pleasant experience and may be accompanied by terror, physical pain, and exhaustion. Every voodooist has a specific loa that rides him or her during possession trances, and these spirits are referred to as one’s “mother” and “father.” Voodooists firmly believe that such possessions are real, scientists and anthropologists obviously come to other conclusions. To voodooists, the loas are said to love, protect, and guard them. They suggest remedies then they are sick. If they are hungry, the loa will appear to them in a dream and give them courage. Some say killed a rival or brought them a wife. There are voodoo kings or priests, known as a houngan. There are also voodoo queens or priestess, known as mambos. Both are treated like royalty by devotees who believe that they derive their supernatural insight and power directly from the loa. It is known that not all houngan and mambos are strictly honest or even sane. Many are maladjusted or neurotic. Another element of voodoo is magic which makes use of spells, charms, and talismans believed to offer supernatural powers or protection. Those wishing to utilize black magic consult with a houngan and mambos known as “sorcerers.” Loas are really demons deceiving people. The living God of the Bible, Jesus Christ, condemns all forms of idolatry, witchcraft, and channeling. Getting involved with Voodoo will open a person to a host of demonic infestation.”

If you have been involved with Voodoo and have turned to the Lord and God Jesus Christ and need prayer for deliverance, please feel free to reach out to me.

“God, I recognize that I have not lived my life for You up until now. I have been living for myself and that is wrong. Please forgive me of all of my sins just as I forgive others. I need You in my life; I want You in my life. I acknowledge the completed work of Your only begotten Son Jesus Christ in giving His life for me on the cross, I believe in my heart Jesus is Lord and was raised from the dead and I long to receive the forgiveness you have made freely available to me through this sacrifice. Come into my life now, Lord. Take up residence in my heart and be my king, my Lord, and my Savior. From this day forward, I will no longer be controlled by sin, or the desir

2 thoughts on “Voodoo is Demonic”