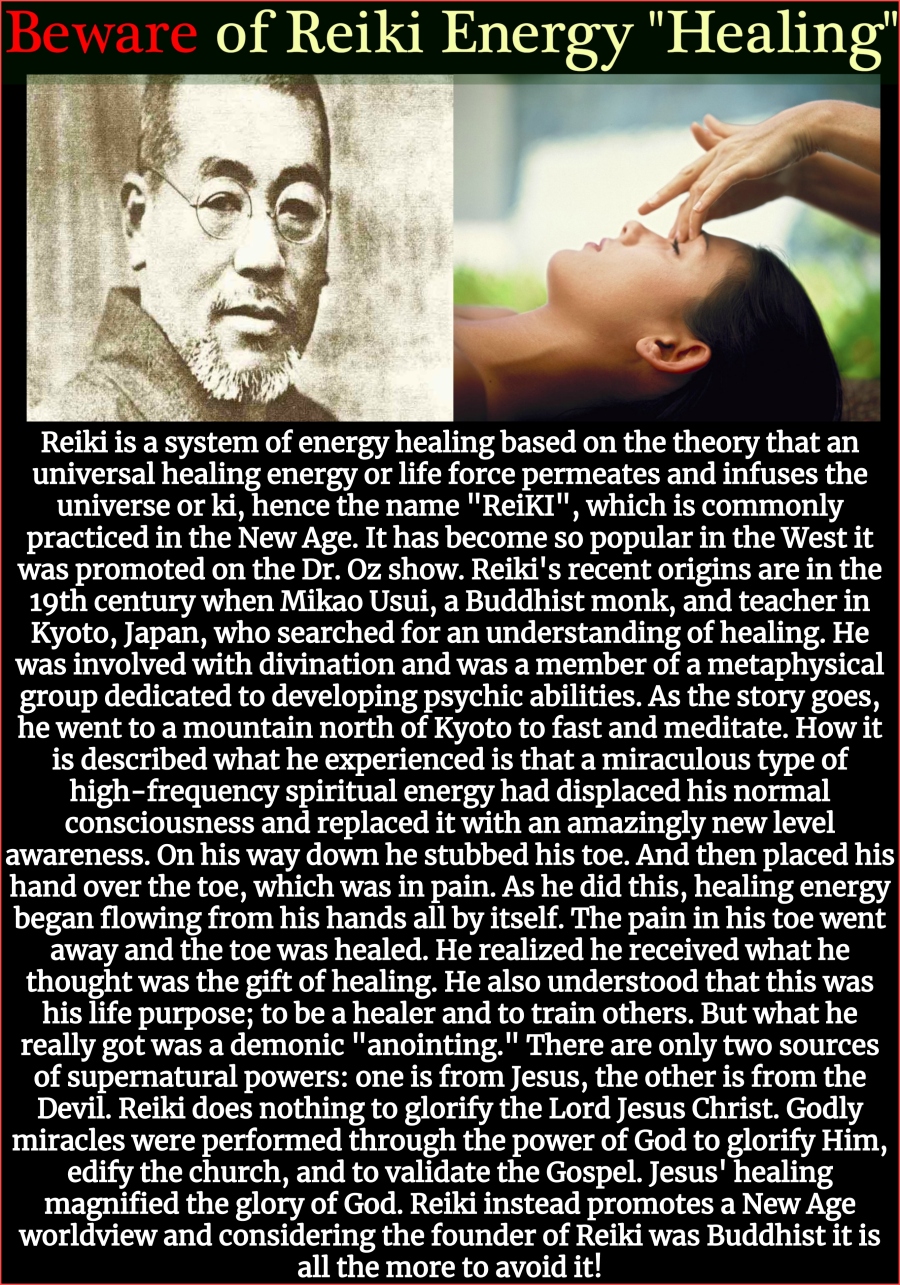 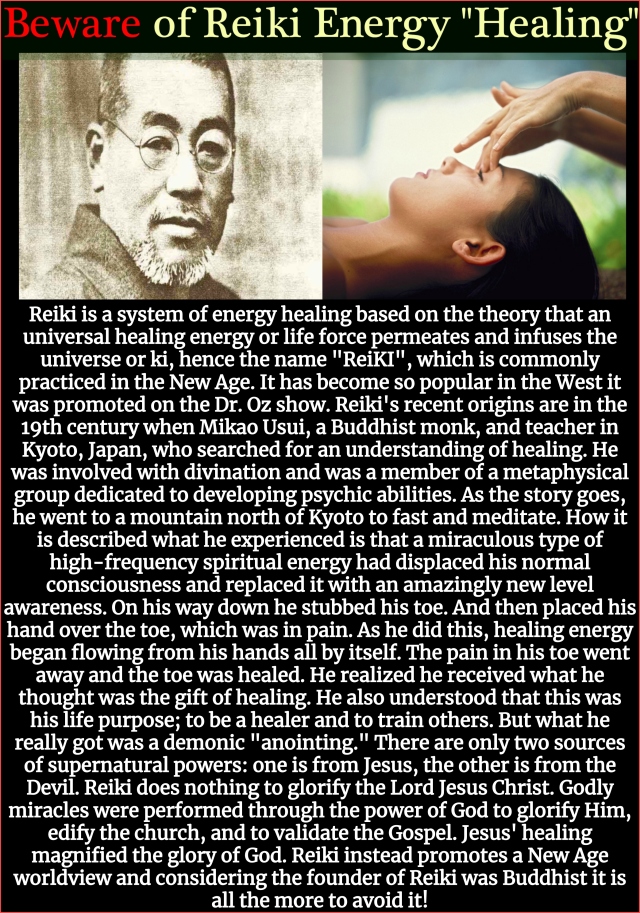 “Reiki is a system of energy healing based on the theory that an universal healing energy or life force permeates and infuses the universe or ki, hence the name “ReiKI”, which is commonly practiced in the New Age. It has become so popular in the West it was promoted on the Dr. Oz show. Reiki’s recent origins are in the 19th century when Mikao Usui, a Buddhist monk, and teacher in Kyoto, Japan, who searched for an understanding of healing. He was involved with divination and was a member of a metaphysical group dedicated to developing psychic abilities. As the story goes, he went to a mountain north of Kyoto to fast and meditate. How it is described what he experienced is that a miraculous type of high-frequency spiritual energy had displaced his normal consciousness and replaced it with an amazingly new level awareness. On his way down he stubbed his toe. And then placed his hand over the toe, which was in pain. As he did this, healing energy began flowing from his hands all by itself. The pain in his toe went away and the toe was healed. He realized he received what he thought was the gift of healing. He also understood that this was his life purpose; to be a healer and to train others. But what he really got was a demonic “anointing.” There are only two sources of supernatural powers: one is from Jesus, the other is from the Devil. Reiki does nothing to glorify the Lord Jesus Christ. Godly miracles were performed through the power of God to glorify Him, edify the church, and to validate the Gospel. Jesus’ healing magnified the glory of God. Reiki instead promotes a New Age worldview and considering the founder of Reiki was Buddhist it is all the more to avoid it!”

I prompted to again warn people about Reiki since lately many people have been contacting me who had been involved with it. I can tell you without a shadow of a doubt you are getting serious, heavy demonic infestation if you receive reiki “treatment.”

It is even practiced in hospitals: “More than 60 U.S. hospitals have adopted Reiki as part of patient services, according to a UCLA study, and Reiki education is offered at 800 hospitals. The Healing Touch Professional Association estimates that more than 30,000 nurses in U.S. hospitals use touch practices every year.” Source

“I believe chi, ki, prana, psychic energy or whatever name one wants to label it are simply just demons masquerading. These mystical energies are indistinguishable from the occult power that occultists claim is given by demons in magic ritual. This “energy” can act independently, display intelligences, enter a person, and cause the development of psychic powers, radical occultic personality transformation, and spirit possession further proving they are demons.

Healers using the power of demons is nothing new. This has been going on for thousands of years: “The world in which the early Christians lived was full of demons and demon- energized healers and magic workers (Acts 8:9-11; 13:7-10). In the temple of Serapis at Alexanderia Egypt, multitudes of pagans were remarkably healed. Pilgrimages to Epidaurus in Greece became world famous, and a night’s sleep in the sacred temple cured thousands” (Albert Henry Newman, A Manual of Church History, 1: 32, 161.)”

“How do I know all of this demonic? Because it doesn’t glorify the God of the Bible. That should be the litmus test if a supernatural act is of God or of the devil. You have to ask yourself who is getting the glory if someone is getting supernaturally healed? Biblically, Godly miracles were performed through the power of God to glorify Him, edify the church, and validate the Gospel (Read Acts 14:3; Heb. 2:4; 1 Cor. 12:7, 14:12-13). Jesus’ healing magnified the glory of God. For instance, after the blind man by the side of the road was healed in Luke 18:35-43, he followed Jesus, “and immediately he received his sight, and followed him, glorifying God: and all the people, when they saw it, gave praise unto God” (verse 43). This same glorifying and praising of God happened after Jesus healed the paralytic (Matthew 9:2-8, Mark 2:10-12, Luke 5:22-26), when He healed the “…lame, blind, dumb, maimed, and many others…insomuch that the multitude wondered, when they saw the dumb to speak, the maimed to be whole, the lame to walk, and the blind to see: and they glorified the God of Israel” (Matthew 15:30, 31). Other examples where glory was given to God when supernatural healing occurred was when Jesus raised the dead man in Nain (Luke 7:11-16), made the woman bent doubled stand straight (Luke 13:13), and when one of the ten lepers healed by Jesus turned back “glorifying God in a loud voice” and falling on his face at Jesus’ feet (Luke 17:15, 16). One of satan’s job description is to try to rob the living and true God of the Bible of His glory and he will try any means to try to do it.

Aside from opening doorways to demonic infestation and usurping God’s glory, the devil is in the business of “healing” because individuals who get involved in it usually adopt  doctrines of demons or an unbiblical worldview. These psychic or faith healers may engage in fortune-telling and a wide variety of other occult powers along with healing. Their philosophy is consistently anti-biblical. Even though their world view is almost universally religious, and many claim to be Christians, their philosophy incorporates reincarnation, pantheism, animism, monism, or syncretism. A lot of these psychic healers believe in God, but a God of their own making – an impersonal or pantheist god – never the Biblical God.”

The following is a very informative video about Reiki and Energy Healing and how it is spreading like a wildfire.