I like to emphasize that we wrestle not against flesh and blood but against Satan’s kingdom (Eph. 6:12), who comes to kill, steal and destroy (John 10:10). Well, he did just that when on May 18th Richard Rojas plowed through a crowd with a car in Times Square killing an 18-year-old girl and injuring many.

What would compel a person to do such an evil act? News reports state that Richard claimed he was on drugs and he heard voices in his head telling him to kill. I have absolutely no doubt demons were speaking in his head compelling him to commit evil. As someone who as prayed for deliverance for demonized people countless times I know of one of the telltale signs of having demons is hearing voices in the head, especially voices that speak evil. 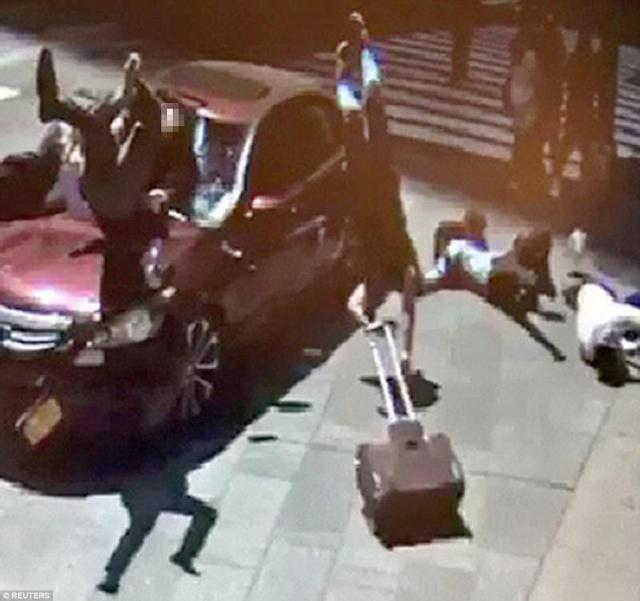 Richard supposedly laced his marijuana with the hallucinogenic drug PCP to create the ‘zombie drug’ Spice. The news report reads:

The crazed driver accused of plowing down pedestrians in New York‘s Times Square told police he laced his marijuana with the hallucinogenic drug PCP to create the ‘zombie drug’ Spice.

Richard Rojas, a 26-year-old from the Bronx, was charged with murder after killing 18-year-old Alyssa Elsman and injuring 22 others when he sped down one of the busiest sidewalks in the US in his car for three blocks on Thursday.

He was arraigned in a Manhattan court on Friday where he was held without bail and did not enter a plea.

According to the criminal complaint, Rojas told police after his arrest: ‘I smoked marijuana. I laced the marijuana with PCP.’

It comes as it’s revealed Rojas had a troubled history – including time served in a military prison – that descended into paranoia and harassment in the weeks leading up to the deadly crash.

Rojas, who was taken to a psychiatric hospital for evaluation after his arrest, gave a number of excuses for the rampage when he was questioned by police – including that he was ‘hearing voices’.

He also told investigators that he had wanted to provoke police into killing him after mowing down the pedestrians and that God had made him carry out the attack.

‘You were supposed to shoot me. I wanted to kill them,’ he allegedly told police.

I have made several posts stating how drug use is one of the easiest ways to open oneself to the demonic realm (LSD (Psychedelics) Opens Portals to the Demonic & Marijuana Smoking Linked to Psychosis). Any drugs that alter our consciousness should be avoided!

Is it no wonder God forbids the use of drugs?

“But the fearful, and unbelieving, and the abominable, and murderers, and whoremongers, and sorcerers, and idolaters, and all liars, shall have their part in the lake which burneth with fire and brimstone: which is the second death.” Revelation 21:8

Our bodies are meant to house the Holy Spirit but when we sin we open up doorways for the enemy to come in and defile it and in Richard’s case to use him to harm others.